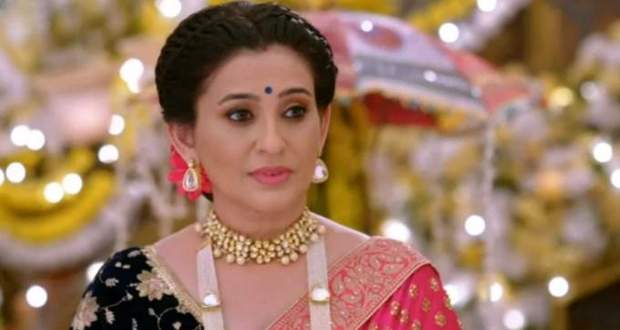 Balwinder curses everyone to hurry up in mind as he feels suffocated in the disguise.

Rishi and Lakshmi start to do the puja while following Pandit Ji instructions.

Later on, Dadi demands Lakshmi to do the aarti but Lakshmi urges Neelam to do aarti as she is the elder one.

Neelam refuses as she thinks Lakshmi wants to seem like a kind-hearted bahu.

However, Dadi urges Lakshmi and Rishi to do the aarti.

Lakshmi and Rishi do the arti together while gazing at each other happily.

Lakshmi prays to Mata Rani to keep Rishi safe while Rishi asks for Lakshmi’s wish to get fulfilled.

Meanwhile, Malishika and Kiran wishes for Lakshmi to get out of her life while Malishka wishes to get married to Rishi.

The puja finishes while Balwinder announces that the daughter in law will do Jal abhishek.

Balwinder recalls connecting the kalash with the electric socket while Malishka switches on the switch while Lakshmi walks to hold the kalash.

Lakshmi touches the kalash and gets electrocuted and gets unconscious from the impact.

Meanwhile, Durga Devi tries to find Balwinder but he runs away successfully.

Rishi sprinkles water on Lakshmi but she doesn’t wake up.

Virendra calls a doctor to reach the house immediately but Lakshmi wakes up after Rishi’s constant efforts.

Seeing Lakshmi awake, Malishka curses her for having a luck of gold.

At the same time, Durga Devi starts to find Balwindar everywhere while Balwinder hides from her.

Rishi hugs Lakshmi affectionately while everyone urges her to rest in the room but Lakshmi refuses as the puja is still left.

Meanwhile, Ayush tries to check the kalash but Lakshmi stops her, warning him of getting electrocuted.

Rishi reasons for not having any electric socket near the kalash and tries to check the kalash to solve the mystery but Virendra stops him.

Seeing Lakshmi going to the bathroom to wash her face, Malishka expresses her concern of Lakshmi finding out the truth if she goes into the guest room.

Malishika follows Lakshmi after making an excuse of taking a loo.

Dadi expresses her concern about Lakshmi’s health to Ahana.

Meanwhile, Ayush is finding Durga Devi near the car and hears a crashing sound nearby which is accidentally made by Balwinder.

© Copyright tellybest.com, 2020, 2021. All Rights Reserved. Unauthorized use and/or duplication of any material from tellybest.com without written permission is strictly prohibited.
Cached Saved on: Friday 30th of September 2022 04:57:34 PMCached Disp on: Saturday 1st of October 2022 04:59:35 PM