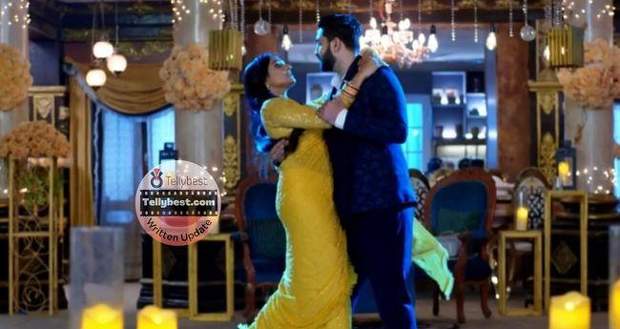 Today's Bhagya Lakshmi 10th December 2022 episode starts with Neelam telling someone on the phone that the orphanage should not close and that they will get all the help they need.

Meanwhile, Malishka comes to the kitchen for water and changes the tiffin that was meant for Rishi.

Seeing Rishi pick up the wrong tiffin, Malishka smiles knowing that now Lakshmi will have to use the Maroon car to take Rishi’s tiffin to him.

Later, Malishka informs Sonal that Laxmi has left in Maroon car and she is following her.

Sonal tells her not to worry and that she will let Ashish know to get ready.

Later, Lakshmi comes to the kitchen and finds Rishi’s tiffin there and decides to take it to Rishi.

On the other hand, Ashish sees the Maroon car and picks up its trail not knowing that not Lakshmi but Neelam is in the car.

Meanwhile, Sonal's car breaks on the way and she sees Lakshmi in an auto and immediately calls Ashish to stop crashing into the car.

However, Ashish does not pick up the phone and is irritated by it too.

After constant calling, Ashish picks up the call and stops just a second before he hits the car.

Later, Sonal scolds Malsihka for not checking the passenger in the car which would have caused a huge blunder.

Malishka also gets angry at Sonal’s rude behaviour and shouts back at her that she has herself switched the tiffin to get Lakshmi out of the house in a car.

Later, she recalls Neelam not being in the house and tells Sonal that it must be her which makes Sonal angrier.

Malishka fights with Ashish for not being able to do the work as told and calls him useless.

Ashish also gets angry and scolds Malsihka for being reckless.

Just then Kiran calls Malishka which got picked by Malishka’s hand without her realising it.

Meanwhile, Sonal tells Malishka that they still can get the job done as she is still in the auto.

Kiran overhears their conversation and tries to stop Malishka but her voice could not reach her.

Later, the auto driver has an emergency and drops Lakshmi on the way on Lakshmi’s insistence and leaves with extra money that she has given her.

As Lakshmi is walking by, she gets a call from Rishi who flirts with her for some time and confesses to bringing the wrong tiffin.

However, Lakshmi wants to surprise Rishi and lies to him that she cannot come there today.

Afterwards, Sonal and Ashish spot Lakshmi on the road and inform Malsihka about it.

Sonal and Ashish are excited to get the job done and are about to hit Lakshmi with their car when she jumps on the footpath and saves herself.

She sees a girl crying for a balloon and buys some more for her and offers money to her mother to buy some food for themselves while the woman prays for her safety and long life.