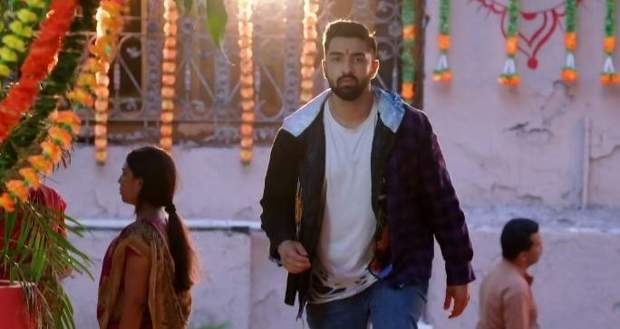 Hearing this, Karishma tries to object by calling Harleen superstitious.

This statement makes Harleen angry and while standing up from the chair she orders Ahana to go alone.

Rishi then announces that he will go with Lakshmi and Ahana.

Malishka then drags Rishi to his room and at first Rishi tries to make Malishka understand this situation but like always Malishka accuses him of being Lakshmi's shadow.

This triggers Rishi's anger and he angrily tells Malishka that he is getting tired of her dramas.

Further Rishi announces that he is going to Mandir as per Dadi's wish and Malishka can not stop him.

Later Malishka arrives in the living room and announces that she will also go with them.

Harleen at first denies but noticing Mslishka's tantrum, she agrees.

After Lakshmi calls Malishka drama queen, she and Malishka get into a heated argument.

Karishma takes Malishka's side and orders Lakshmi to behave nicely with Malishka.

In the car, when Malishka shouts at Lakshmi for ordering Rishi like a driver, Lakshmi tells simply that Rishi is her husband and Ahana's brother.

She further tells Malishka that Malishka is not related to Rishi.

During the journey Rishi plays a song as per Malishka's request.

Hearing the sad songs, Rishi just stares at Lakshmi through looking glass while Lakshmi remembers her and Rishi's happy memories.

Meanwhile in Oberoi mansion, Harleen tells Karishma that there are certain rules in a marriage that they can't break.

She further tells Karishma to stay calm until Ahana's marriage is completed.

In the temple, while buying puja thali, Lakshmi stumbles on het feet but Ahana saves her.

Later during the puja, Malishka again creates a scene when the pandit stops her from sitting in puja.

Hearing this, oversmart Malishka takes Lakshmi's hand and leads her outside.

Once outside, Lakshmi tells Malishka to stop creating unnecessary drama as today's puja is very important for Ahana's blessing.

Rishi also arrives there and shouts at Lakshmi and Malishka for arguing in the temple.

At the same time, Malishka gets a call from Karishma who informs her that she has a plan to put Lakshmi to her place.

When the pandit blesses Lskshmi and Rishi with a child, Malishka once again shouts at him.

© Copyright tellybest.com, 2020, 2021. All Rights Reserved. Unauthorized use and/or duplication of any material from tellybest.com without written permission is strictly prohibited.
Cached Saved on: Thursday 9th of June 2022 11:53:58 PMCached Disp on: Saturday 25th of June 2022 08:15:13 PM