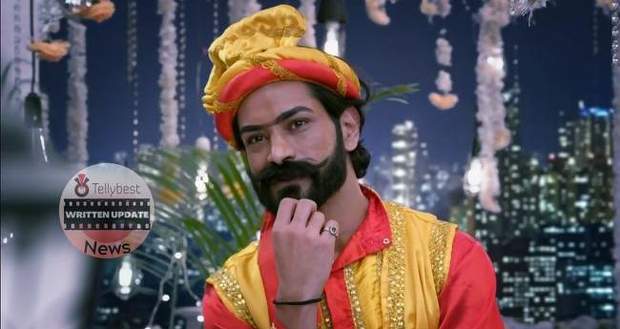 On the other hand, Balwinder throws Lakshmi on the bed and Lakshmi falls unconscious.

Before closing her eyes, Lakshmi throws her kumkum away from the window.

Meanwhile, Simmy tells her husband that she feels hungry now and Rano also yells that she will collapse if she does not eat anything.

Neelam then urges everyone to eat food but everyone announces that they will only eat when Lakshmi returns.

In the meantime, Balwinder starts recording himself and Lakshmi on the camera and informs his imaginary audience that this is the first time he will break his precious wife Lakshmi’s fast.

He then starts shaking Lakshmi to wake her up and Lakshmi’s eyes flutter open.

On the other hand, Ayush tells everyone that Rishi has rescued Lakshmi and everyone walks away to eat food.

After everyone leaves, Ayush tells Harleen that he hopes his lie comes true.

A flashback then shows Harleen ordering Ayush to lie to people about Lakshmi being found as she does not want the4 guests to suffer because of her family.

Back in present, Virendra questions Ayush about how long Rishi will take to bring Lakshmi.

Ayush also adds that he thinks Balwinder is the suspicious dhol player while Virendra looks worried.

Meanwhile, Lakshmi refuses to drink the water, and Rishi arrives there at the same time and starts beating Balwinder like a raging bull.

During the fight, Rishi angrily tells Balwinder that if the law allowed him then he would have killed Balwinder.

While Rishi pins Balwinder to the nearby wall, Balwinder yells that he brought Lakshmi into Rishi’s room as he thought Rishi will never come here to look.

Rishi however informs Balwinder that he found Lakshmi’s sindur box outside and it led him to Lakshmi.

While Rishi and Balwinder are busy fighting with each other, Lakshmi calls Ayush for help with dizziness.

Balwinder then overpowers Rishi and injects a drug into Rishi’s body.

Lakshmi calls Rishi’s name and tries to go to her but Balwinder grabs her.

He then informs Lakshmi that Rishi will be unconscious for the next five-seven hours so Lakshmi will stay hungry.

He further announces Lakshmi is only his and he is even ready to kill anyone for her.

Balwinder further adds that he is running away this time as Ayush can enter the room any minute with his team but he will come back for Lakshmi.

After Balwinder runs away, Lakshmi urges Rishi not to lose his eyes while he orders Lakshmi to eat something before he falls unconscious.

Lakshmi orders Rishi not to worry about her and Virendra along with Ayush bursts into the room.

Finding Ayush there, Rishi orders him to bring a glass of water for Lakshmi.

Later after feeding Lakshmi food, Rishi falls unconscious on her shoulder while Virendra and Ayush smile.

Virendra then starts feeding Lakshmi like a fatherly figure.

Neelam arrives there at the same time and starts blaming Lakshmi for Rishi’s situation.

Virendra orders Neelam to understand that Lakshmi is Rishi’s lifeline but Neelam just rolls her eyes.

One by one all the Oberoi family members enter the room and Harleen orders, everyone, to come out.

© Copyright tellybest.com, 2022, 2023. All Rights Reserved. Unauthorized use and/or duplication of any material from tellybest.com without written permission is strictly prohibited.
Cached Saved on: Monday 21st of November 2022 03:02:09 AMCached Disp on: Monday 5th of December 2022 12:24:10 AM