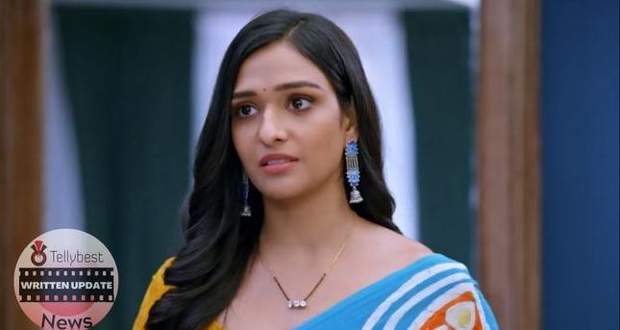 Today's Bhagya Lakshmi 10th October 2022 episode starts with Harleen telling Lakshmi that once Rishi does “Ravan Dahan” all problems will vanish from their life.

At the same time, Rishi enters the room and Harleen offers him some fruits.

Seeing this, jealous Lakshmi urges Harleen not to give Rishi fruits as Malishka is here to feed him with her hands.

Hearing this, Rishi replies he can't say no to her mom but rolling her eyes, Lakshmi announces that she is just trying to understand Rishi’s relationship with Malishka.

Seeing this, Harleen urges Lakshmi to feed Rishi while Rishi announces Lakshmi can risk her life for him but now she is fighting with him.

Later when Rishi and Lakshmi start bantering, Harleen orders them to calm down and asks Lakshmi to feed Rishi regardless.

Turning her head to another side, Lakshmi spreads her hand to feed Rishi but he starts moving around to irritate her.

Seeing this, angry Lakshmi forcefully puts fruit in Rishi's mouth and walks away.

After Lakshmi walks away, Harleen joyfully tells Rishi that even in an angry state Lakshmi cares for him.

To prove her point, Harleen screams as if Rishi is in danger and Lakshmi runs into the room panicked.

When she notices Rishi sitting calmly, she walks away after cursing Rishi in Punjabi.

Meanwhile, in Bajwa's house, Bani tells Shalu that she will not eat kheer till the culprit gets caught but Shalu tries to change Bani’s mind.

On the other hand, Lakshmi notices the cushion, and recalling Malishka’s falling, she starts fuming in anger.

When Rishi enters the room, she sarcastically asks him if he is feeling Malishka’s pain.

Further, she urges Rishi to take Malishka to the hospital for a check-up.

While Rishi turns another way, Lakshmi imitates Malishka's falling and gets angry when Rishi just stands there.

Going close to Rishi, Lakshmi yells that Malishka was very close to him and turns around to walk away.

Grabbing Lakshmi's hand, Rishi pulls her towards him and questions her in a deep voice if Malishka was this close to him.

Being sudden close to Rishi, Lakshmi gulps and Rishi pulls Lakshmi even closer.

Securing Lakshmi between his arms, Rishi gets lost in her eyes.

Meanwhile, happy Malishka joyfully tells Kiran that she is sure Rishi still loves her and her mom agrees.

Afterward, Kiran urges Malishka to stay focused on her plan to get Rishi and vanish the footage.

Meanwhile, in Oberoi's mansion, the spell breaks, and Rishi lets go of Lakshmi from his embrace and Lakshmi hits her head on her way.

Seeing this, concerned Rishi takes care of Lakshmi with care.

At the same time, entering the room, Harleen orders Rishi and Lakshmi to stand close to each other.

Noticing their confused face, Harleen picks up two flowers and puts them close to each other.

When Lakshmi still looks clueless and frustrated Harleen walks away.

After Harleen leaves, Rishi announces he is not stupid he knows Dadi wants him to kiss Lakshmi.

© Copyright tellybest.com, 2022, 2023. All Rights Reserved. Unauthorized use and/or duplication of any material from tellybest.com without written permission is strictly prohibited.
Cached Saved on: Monday 21st of November 2022 10:47:04 AMCached Disp on: Friday 9th of December 2022 05:11:07 AM