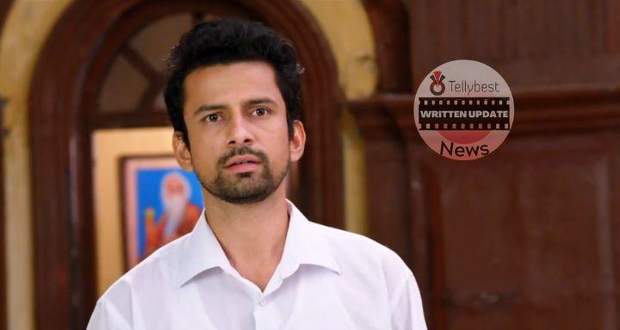 Today's Bhagya Lakshmi 10th September 2022 episode starts with the police bringing Munish inside when the special security turns on the police and reveals themselves to be a part of Munish's gang.

However, he misses while the terrorists trap all the police and others inside the court where Lakshmi's hearing is going on.

The police officer tells the judge to get to safety first but he refuses and says that he will leave only after all the people are put to safety.

Uday thinks to do live reporting while the police officer goes to lock the doors.

Before he can close the door, Munish and the terrorists manage to barge in and fire at civilians to scare them.

Neelam falls and a terrorist Balram is about to shoot her but Lakshmi comes forward and stops him.

Balram calls Neelam a 'Giri Hui Aurat' and Lakshmi shouts at him which angers Balram.

The terrorists start joking around about whether they should kill Neelam first or Lakshmi.

Balram decides to target Lakshmi first and drags her by her hand while Malishka picks up Neelam while trying to manipulate her by saying that Lakshmi puts her intentionally to create the drama.

Rishi spots the police officer's gun lying on the ground and picks it up to threaten Balram who is pointing his rifle at Lakshmi.

All the while, Uday is recording everything on his phone.

Munish enjoys the drama and tells Rishi to shoot at Balram or he will shoot at Lakshmi.

However, if Balram dies, all the terrorists will shoot at Rishi.

Lakshmi begs Rishi to let go of the gun while Munish starts counting.

However, Aayush manages to catch Lakshmi's eyes as he signals something to her to calm her.

Suddenly, Rishi maneuvers through the terrorists and jumps the barrier as he points his gun at Munish.

On the other side, the court gets barricaded by the police force while the reporters reach there to cover the drama.

Aayush takes the civilian towards the exit door but a terrorist stops them while Munish grabs Rishi's gun and demands him to shoot.

Suddenly, another terrorist points the gun at Lakshmi which distracts Rishi and Munish punches him.

The terrorists start beating up Rishi while Lakshmi begs to let Rishi go.

The ACP tells the reporters that the police force takes responsibility for all the hostages and promises to rescue them alive.

Meanwhile, inside the court, Munish tells his gang that they are going to give their special gift to Rishi which they were supposed to give to the judge.

Further, Munish mocks the judge and tells him that he is there for revenge as the judge had given him life imprisonment.