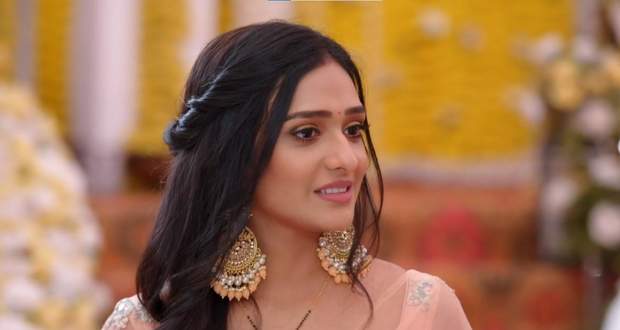 Elsewhere, Balwinder is freaking out as his fake beard is not getting attached again.

When he peaks out of the window, his false beard falls and gets stuck in a nearby cycle.

However, without noticing the mustache, Ayush urges Inspector Durga to enter the house as he is sure nobody has come out.

Meanwhile, in the Oberoi mansion, Harleen indirectly tells Neelam that Rishi and Lakshmi belong with each other as they always protect each other.

Hearing this, Neelam just rolls her eyes while Rishi informs everyone that he thinks someone tried to murder Lakshmi.

When Karishma tries to refuse it, Ahana points out that only Balwinder can harm Lakshmi.

However, Neelam along with Virendra denied it as they have not seen Balwinder.

Ignoring all the remarks, Rishi informs everyone that he needs to learn if it was an accident or not.

On the other hand, Ayush finds the false moustache outside and realizes the pandit was fake.

Inside the Oberoi mansion, Lakshmi thanks God for saving Neelam and others.

When Lakshmi enters the guest room, Balwinder hides behind the closet.

Seeing Lakshmi, sacred Balwinder decides to beg for forgiveness from her as he thinks she is a ghost.

At the same time, another pandit tells the Oberoi family that “Jalabhishek” is no need for the puja.

On the other hand, Malishka scolds Balwinder for ruining her plan.

She even orders him to stay away from Inspector Durga.

Hearing the whispering sound, Lakshmi comes out of the bathroom but finds no one.

Later, Ayush stops Lakshmi in the hallway and reveals that Malishka is behind Lakshmi’s accident.

Hearing this, Lakshmi refuses to believe it but Ayush shows her the fake moustache.

He even urges Lakshmi to check the guestroom with him as the fake pandit is still there.

However, seeing them, Malishka runs after them.

At the same time, Rishi announces to all the family members that he will punish the culprit.

Hearing this, Soniya informs Rishi that Lakshmi is not dead so he can relax.

This triggers Rishi’s anger and he scolds her for it.

However, Neelam calms everyone down and advises them to carry on the puja.

On the other hand hearing the footsteps, Balwinder hides behind a couch.

Seeing the room empty, Lakshmi tells Ayush that she is sure that the fake pandit has escaped.

At the same time, Malishka enters the room.

Seeing Malishka, Ayush smirks as he thinks Malishka is here to observe the situation.