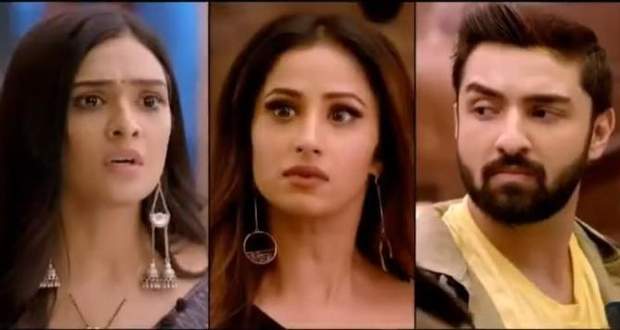 Today's Bhagya Lakshmi 11th July 2022 episode starts with Shalu finding a stick and telling Lakshmi that something has happened here.

Seeing this, Lakshmi gets even more worried for Rishi’s safety.

On the other hand, in Balwinder’s home, Rishi falls on Balwinder while Ayush is strangled by Balwidner’s friend.

At the time, police arrives at the scene and the head of police inquires Lakshmi and Shalu about Rishi and Ayush.

When Lakshmi tells him about Balwinder, he advises them to go home.

After Balwinder leaves with his friend, Ayush finds a knife and frees himself and Rishi.

When Balwinder returns, Rishi and Ayush start asking Balwinder about the person who has told him about Lakshmi’s pregnancy.

However, Balwinder refuses to tell the truth, Rishi orders Ayush to take him to the Oberoi mansion with them.

In the Oberoi mansion, Lakshmi is scolding Shalu for coming here with her instead of going home.

Seeing Rishi with Balwinder, Lakshmi questions Rishi about his well-being but Rishi just simply shrugs and says that he just wants to learn the truth.

While walking in the living room, Malishka is shocked to see Balwinder tied up.

Now worried Malishka is sure that Balwinder will spill her name and she will be finished.

At the same time, Rishi tells everyone that someone is involved with Balwinder.

Hearing this, angry Neelam says if this is the case then she will be the one to punish.

However, Balwinder refuses to open his mouth.

Lakshmi tries to stop him but Rishi gets into a trance while beating him.

Even everyone else also tries to control the angry Rishi and somehow Rishi controls his anger.

Rishi then orders Ayush to arrange a knife for him.

Hearing the word knife, Balwinder looks at Rishi with questioning eyes, Rishi says that he will pill his skin using the knife.

When Ayush returns with the knife, Malishka attempts one last time to save Balwinder but Rishi ignores her.

Later, Rishi tells Neelam that he will just torture Balwinder until he reveals the name.