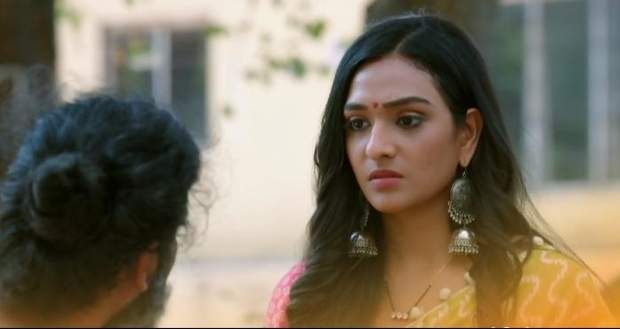 However, Malishka does not like Rishi's tone and tells him that now he is doing puja with Lakshmi and soon he will share a bed with her.

Hearing this, Rishi just says he has taken the marriage decision with full maturity and walks away leaving Malishka stunned.

On the other hand, while walking Lakshmi feels dizzy but before she can fall Rishi catches her.

Later, Rishi carries Lakshmi in his arms to a less crowded place and Malishka arrives there with water for Lakshmi.

After Lakshmi regains her consciousness, Rishi starts questioning her if she is okay.

Instead of answering, Lakshmi runs toward a male beggar to help.

Seeing Lakshmi touching the make beggar, Malishka just expresses her disgust to Rishi who however urges her to stop the melodrama.

While the beggar is giving Lakshmi a blessing, a lady monk approaches her.

She then tells Lakshmi mysteriously, that whatever she wants she will get it as she has a kind heart.

While walking away, the lady monk notices Rishi and announces that Markosh dosh will again create problems for Rishi so Lakshmi should protect him.

Later during the return journey, Malishka once again calls Lakshmi fake claiming that she acted unconsciously to get Rishi's sympathy.

However, Lakshmi just ignores Malishka and orders Rishi to stop the car.

When Rishi asks questions, Lakshmi just responds that she just has some personal work.

Though Rishi agrees, his mind is filled with confusion.

Meanwhile, in Bajwa's house, Neha is once again shouting at Bani and Shalu for being unemployed.

She even announces that because of her ill-wishing, Lakshmi is getting divorced from Rishi.

Elsewhere, after just arriving at the Oberoi mansion, Malishka starts complaining about Lakshmi to Virendra, Karishma and Harleen while Rishi just stares at her with disappointment.

However, Ahana announces that she is sad because of Malishka's drama.

When Malishka tries to protest, Harleen steps in and yells at Malishka for destroying the marriage vibe in the house with her drama.

Dadi then along with Ahana and Karishma goes to Neelam's room to show her some jewellery.

Meanwhile, Badrinath Pandit informs Lakshmi that Rishi's Markodh dosh has never left him and now it is strong in his Kundli which is dangerous for Rishi.

He further announces that this month is hard for Rishi and only Lakshmi's love can save him from the dengers.