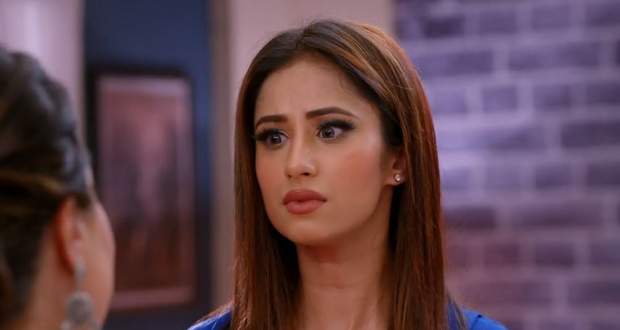 Malishka tells the reporters that Lakshmi is a gold-digger and also tells them that they are in the illusion that Rishi and Lakshmi are power couples.

Later, Shalu follows Malishka and reminds her that what she is doing will never get Rishi back to her.

When Malishka says that Rishi does not want her lovely sister, Lakshmi, Shalu says that she knows Rishi well so she must realize that Rishi loves Lakshmi.

Without any fear, Shalu tells Malishka that Rishi will learn that Lakshmi is his real love soon.

As Malishka is not able to accept the truth, she walks away cursing Shalu.

Later, at night, Rishi notices Lakshmi struggling to apply ointment to her wounds.

Rishi offers to help and says that this will even out the score against her help in saving him from the cave.

While Rishi blows airs on Lakshmi's wound to reduce the pain, Lakshmi watches Rishi through the mirror.

The next morning, Malishka arrives with her a bouquet for Neelam and is as usual overdressed in a black hyped outfit.

Further, Malishka shocks Neelam and Kiran by saying that she filled the ears of the reporters with Lakshmi's reality and says that the newspaper will have a story of gold-digger Lakshmi.

Later, Shalu arrives with the newspaper and hands it to Malishka.

However, Malishka loses her calm when an article mentions Malishka as an ordinary girl.

After overreacting to the word ordinary, Malishka continues to read articles mentioning Malishka to be the second woman in Rishi's life which drives her crazy.