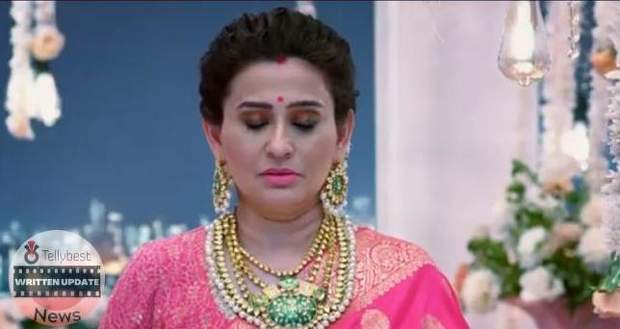 Today's Bhagya Lakshmi 11th November 2022 episode starts with Virendra asking Neelam to say something but Neelam angrily mutters that she does not want to listen about Lakshmi.

Virendra however informs Neelam that she needs to accept Lakshmi as her daughter-in-law.

Neelam yells that Lakshmi is unsuitable for Rishi and the family and that everyone will realize it one day.

Looking at Neelam’s angry face, Virendra lets out a heavy sigh and walks away.

On the other hand, Lakshmi urges Rishi to open his eyes as she has a lot to say to him.

Lakshmi then smiles thinking about how Rishi always saves her from any problems and how he even cared for her today despite being dizzy.

Meanwhile, Rano starts praising Rishi for saving Lakshmi on time as she got to eat a lot of food in front of Bani who yells that Balwinder is after Lakshmi.

Rano gets irritated hearing Balwinder’s name and orders Bani to keep this thought to herself only.

After Bani walks away, Rano feels guilty recalling how she introduced Balwinder to Lakshmi.

Rano however dismisses this thought by justifying that she never knew Balwinder is crazy.

Later, Lakshmi informs Rishi that she will count to three and if Rishi does not open his eyes, she will tell her secrets to the moon.

Lakshmi gets sad when Rishi does not open his eyes even after she finishes the counting but before Lakshmi can walk away, her saree gets stuck.

Thinking Rishi has woken up, Lakshmi turns excitedly but gets sad to see her saree stuck in Rishi’s pillow.

Lakshmi is about to walk away again and Rishi opens his eyes.

To make Lakshmi happy, Rishi puts his hands on his ears and starts doing squats and Lakshmi urges him to stop.

Rishi comes very close to Lakshmi and Lakshmi turns her face side away.

Lakshmi also adds that she will only talk to the moon and Rishi continues doing squats.

Rishi urges Lakshmi to order him to stop but Lakshmi replies that Rishi has to do it till the moon stays in the sky.

After a while, the moon hides and Rishi orders Lakshmi to confess her feelings.

Lakshmi then informs Rishi that she is lucky to have him as her husband for the next seven lives.

Rishi teases Lakhsmi by saying that he wants a different wife in every life and Lakshmi pushes Rishi to the ground.

When Rishi looks at Lakshmi with puppy eyes, Lakshmi helps him stand up and they fall onto the bed.

Looking at Rishi’s eyes, Lakshmi feels her heart racing and she quickly gets up.

Lakshmi then urges Rishi if he will eat anything and Rishi denies it.

Later while Rishi and Lakshmi are bantering with each other, Neelam arrives there with a servant and orders Rishi to eat.

She even advises Rishi to stay alert while looking at Lakshmi.

Rishi nods and Neelam walks away.

© Copyright tellybest.com, 2022, 2023. All Rights Reserved. Unauthorized use and/or duplication of any material from tellybest.com without written permission is strictly prohibited.
Cached Saved on: Monday 21st of November 2022 01:44:04 PMCached Disp on: Thursday 1st of December 2022 11:30:53 AM