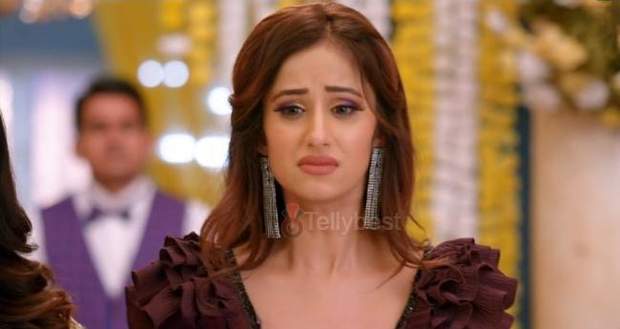 Hearing this, Malishka replies that everyone is waiting for Lakshmi.

While Lakshmi starts walking, Ayush stops her by urging Malishka to help them in their search as the fake pandit is hiding in this room.

Baffled Malishka pretends to search while Ayush murmurs to Lakshmi that this is a test for Malishka because if she finds the fake pandit then this means she is innocent otherwise she is the culprit.

When Malishka notices Balwinder, he requests her not to make any reaction.

Malishka informs Ayush and Lakshmi that the pandit must have run away.

Hearing this, Ayush orders Malishka to walk away but she starts urging Lakshmi to come along as everyone will question her about Lakshmi.

However, Lakshmi advises Malishka to use her name and Malishka walks away reluctantly.

After Malishka leaves, Ayush and Lakshmi also pretend as if they are also walking away.

However, realizing Ayush’s plan, Balwinder stays still in his place.

On the other hand, Rishi discovers the wire that was attached to Kalash.

At the same time, Malishka arrives there and urges Rishi to bring Lakshmi down.

After listening, Rishi informs Malishka that he will bring Lakshmi down after informing Inspector Durga.

Hearing this, Inspector Durga inquires everyone about the pandit.

Karishma informs her that Kiran is the one who knows him.

At the same time, Inspector Durga reveals that she is sure Balwinder is the one.

Malishka quickly denies it by claiming that she has not found Balwinder in the guest room.

Hearing this, Rishi runs to the guest room to check on Lakshmi.

Later when Rishi enters the guest room, Ayuhs tells him that he has a gut feeling that Balwinder is here.

Rishi quickly urges them to come down as nobody is there.

While Lakshmi starts walking, she collides with Rishi.

They get into a funny bunter and Ayush urges them to confess their feelings to each other.

While Ayush is teasing Lakshmi and Rishi about their love, Balwinder is panicking as he thinks he is experiencing hell here.

Ayush then orders Rishi and Lakshmi to look for Balwinder.

Before Rishi can remove the curtains and discover Balwinder, Malishka approaches them.

She even urges them to come down quickly as Harleen is waiting for them eagerly.

After they leave, Balwinder comes out of the curtains and notices a packet.

Seeing the saree in it, he decides to dress up as a woman to escape.

He even thinks of suicide and blames it on Kiran for dragging him not the mess.

However, when he comes outside, the male police accuses him of being Balwinder.

© Copyright tellybest.com, 2020, 2021. All Rights Reserved. Unauthorized use and/or duplication of any material from tellybest.com without written permission is strictly prohibited.
Cached Saved on: Saturday 1st of October 2022 10:39:18 PMCached Disp on: Monday 3rd of October 2022 08:32:45 PM