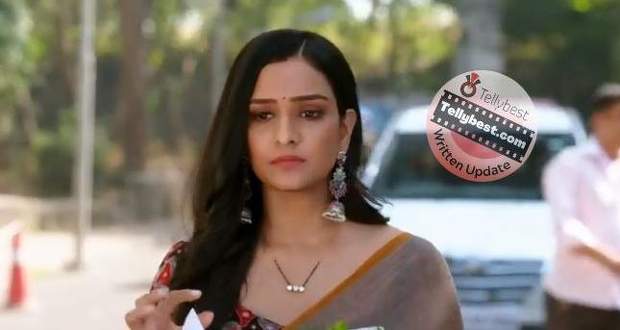 Today's Bhagya Lakshmi 12th December 2022 episode starts with Malishka urging Kiran to open her eyes with tears while Rishi looks at her from the entrance.

A nurse then orders Rishi to buy some medicines for Kiran and Rishi obliges.

Meanwhile, angry Malishka returns to her house and hits Aashish who is about to walk away with a stick furiously.

Aashish however screams that if Malishka was not Sonal’s friend he would have taught her a lesson in an angry tone.

When Malishka raises her hand to slap Sonal, Aashish screams if she even touches Sonal he will kill her.

Ordering both of them to calm down, Sonal tells Malishka that what happened was unfortunate but they did not know Kiran would appear like this.

She even blames Lakshmi for it and Malishka cries in agony as she realizes Kiran was trying to protect Lakshmi.

When Malishka informs Sonal about it, Sonal announces that Kiran must be on Lakshmi’s side but Malishka tells her that Kiran knew Malishka will go to jail for this so she was just trying to protect her.

On the other hand, in the hospital, Rishi gets stunned to see Malishka, not in Kiran’s hospital room.

Back in Malishka’s home, Malishka is sitting on the sofa with her head in her hands and Sonal questions Malishka if Kiran has taken her name.

Malishka announces Kiran will never do this whereas Sonal announces that even if Kiran takes their name, they can easily reveal Malishka was behind this with a smug smile on her face.

On the other hand, in the Oberoi mansion, Ayush tells Lakshmi that he thinks the car was there to hit Lakshmi but Lakshmi denies it by saying no one is after her life.

Lakshmi however tells Ayush that she knows how someone feels when they lose their own mother with tears in her eyes.

Meanwhile, Rishi gets a call from Neelam who orders him to take Malishka’s special care to which Rishi replies that she is absent in the hospital.

Hearing this, worried Neelam orders Rishi to look for Malishka since she is upset.

Back in the Oberoi mansion, Ayush praises Lakshmi for always being caring when he notices Lakshmi praying to god for Kiran’s well-being.

Later, in the hospital, Rishi finds Malishka walking toward him and questions her about where she was.

Malishka then questions Rishi about what to do when their loved one makes a mistake and Rishi replies they need to punish that person otherwise they will do this again.

On the other hand, after Aashish walks away, Sonal tells herself that she hopes nothing like this happens in the future as she does not want to do anything unpleasant.

A flashback shows Sonal advising Malishka to blame the accident on Lakshmi by becoming an eyewitness.

Back in present, Rishi informs Malishka that he has called the police while Malishka looks scared.

Neelam who has also arrived there at the same time orders Malishka to reveal the name of the culprit and Malishka looks hesitant.

Meanwhile, Lakshmi thinks about Priyanka’s words when Shalu arrives there and Lakshmi informs her about Kiran’s accident.

Later, Malishka takes Lakshmi’s name with crocodile tears in front of the police.