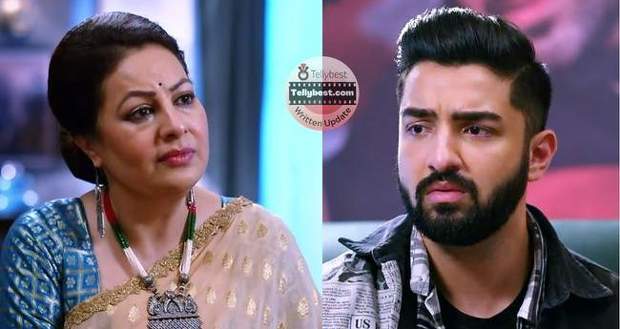 At the same time, Rano gets a call from Balwinder who orders Rano to celebrate as her wish is fulfilled.

Rano’s face lights up after hearing this but she contains her happiness as Bani stares at her.

Rano then orders Bani to go ahead because she has to meet someone and suspiciously Bani walks away.

Meanwhile, in the Oberoi mansion, Malishka thinks Lakshmi must have done black magic on Rishi when Sonal orders her to stay away from Balwinder.

Malishka asks Sonal why she is angry and Sonal announces that Balwinder is very arrogant.

Malishka calmly adds that having a pet like Balwinder is very good still, Sonal tells her that if the Oberoi family gets the hint about Balwinder’s connection with Malishka, their plan will crumble.

Sonal whispers that it has taken them a lot of hard work to make everyone believe that everything happened between Malishka and Rishi on that night so if it comes out Rishi-Malishka’s marriage will be canceled.

Hearing this, Malihska informs Sonal that she does not want anyone to spoil her marriage with Rishi and they look up when they hear a noise.

When Malishka opens the door, she finds Devika standing there and Malishka asks Devika how the tray fell from her hand.

Devika stands there in silence but when Malishka questions her if she was eavesdropping and Devika lies that the plate dropped from her hand as she got scared seeing a lizard.

After Devika walks away, Malishka tells Sonal that she needs to check if Devika has heard anything and she walks away despite Sonal’s urging to stay.

Meanwhile, Devika is walking in the hall while muttering that she needs to tell Harleen the truth.

On the other hand, in Bajwa's house, Lakshmi is checking the kitchen ingredients when the flashback of Rishi and her sweet kitchen memory hit her and she gets upset.

Back in the present, Lakshmi mumbles that only memories are remaining now.

In the meantime, Balwinder gives Rano two lakh causing Rano to get angry as she was expecting full payment.

Rano yells at Balwinder who tells her that it is advanced payment and he will give her rest on the day of his marriage.

Balwinder asks Rano when she is planning his marriage with Lakshmi and Rano orders him to wait as Lakshmi has not said yes.

Balwinder blackmails Rano by reminding her that Neha is also unmarried and agitated Rano orders him to stay away from Neha.

Back in the Oberoi mansion, Malishka eavesdrops on Devika and Harleen’s conversation.

When Devika tells Harleen that she is sure Sonal and Malishka have something to do with that night but she was not able to hear their conversation, Harleen advises her not to think about those two.

Malishka feels relieved as she realizes Devika has not heard anything.

Meanwhile, on the street, Balwinder informs Lakshmi that he cannot see his future wife carrying this heavy bag.

Lakshmi tries to slap Balwinder but Balwinder grabs her hand while announcing that Lakshmi will be his soon.

Rishi who was passing by ins his car gets angry seeing this and pounces on him.

On one hand, Shalu and Ayush think that it is a big conspiracy; on the other hand, Lakshmi urges Rishi to stop the fight but he does not listen.