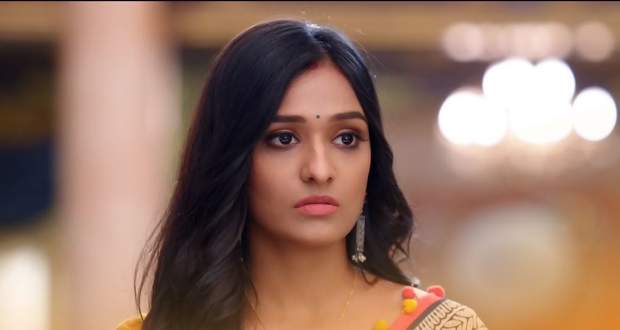 Today's Bhagya Lakshmi 12th May 2022 episode starts with Shalu rebuking Malishka and telling her how she went after the journalists and told them the truth about her being after Rishi.

Shalu replies to Malishka that she hid from the journalists how shallow and selfish she was to get Rishi married to Lakshmi for her own benefit.

In a fit of rage, Malishka is about to slap Shalu when Lakshmi stops and chides her for even thinking about slapping her sister.

Malishka runs to Kiran and Neelam and complains to them that Lakshmi is the one who planned everything and told Shalu to go to the media.

Meanwhile, Lakshmi scolds Shalu and tells her that she shouldn't have called Malishka the second woman in Rishi's life.

Malishka gets Neelam's permission to plan against Lakshmi and tells them to come to the halls once they hear screams.

Meanwhile, at the office, Virendra gets a call from Abhay about the reports after which he calls the news channel to ask who informed them about Malishka.

However, due to miscommunication, Virendra, Rishi, and Ayush think that it was Lakshmi who gave the news to the media.

Back at the Oberoi mansion, ladies from the women's association come there and start shouting for Rishi while Lakshmi reveals that he is not present.

Karishma accuses them of being actors hired by Lakshmi and calls the police while the last shows Neelam an article about them proves their authenticity.

Neelam demands Karishma to disconnect the call while the lady questions Neelam about what did she do to support Lakshmi after learning about Rishi's extramarital affair.

The ladies start questioning everyone while Malishka stops them and angrily says that she'll marry Rishi after kicking out Lakshmi.