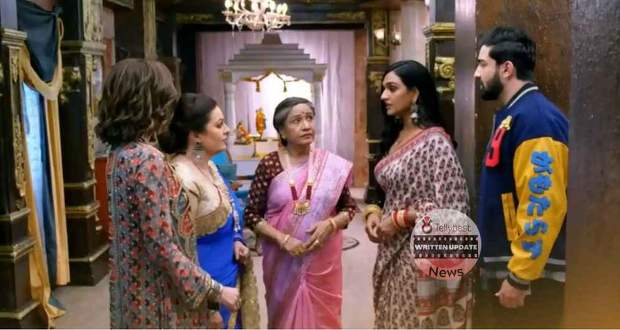 Today's Bhagya Lakshmi 12th November 2022 episode starts with Lakshmi praising Rishi for always taking her side in front of Neelam without disrespecting Neelam.

With a grin, Rishi tells Lakshmi that he has also learned to put others' happiness in front of his joy from her.

Lakshmi gives Rishi a warm smile and Rishi urges Lakshmi to praise him even more but Lakshmi orders him to change his clothes.

After Rishi walks away, Lakshmi gets a video call from Bani who questions Lakshmi if she is okay.

Lakshmi replies that she has a minor headache and Bani offers to give Lakshmi a special Punjabi massage.

Lakshmi denies it with a smile and cuts the call.

Rishi arrives there just then and offers Lakshmi to give her a head massage.

During the massage, Lakshmi tells Rishi that her father used to give head massages to her mom with a somber look while Rishi stares at their reflection in the mirror.

Later, Lakshmi walks into the room and notices Rishi’s hand on the ground.

She yells at Rishi to wake up and sleepy Rishi falls from the couch and his eyes flutter open.

Finding Lakshmi is laughing, Rishi arrogantly remarks that Lakshmi must have also fallen from the couch some time in her life so it's no big deal.

Lakshmi however announces that she will tell everyone about Rishi’s falling and sacred Rishi orders her not to do it.

Rishi then questions Lakshmi why she screamed his name and Lakshmi replies that Rishi’s hand would touch her feet if she did not call out his name.

Rishi looks at Lakshmi with questioning eyes and Lakshmi clarifies that wives should touch their husbands' feet not the other way around.

With a scoff, Rishi replies it does not matter and Lakshmi walks away.

On the other hand, Karishma orders Ayush to take aunty to her home but Ayush denies it since he is very tired.

Lakshmi enters the room just then and reminds Ayush that the aunty is ill so he should not deny it.

Ayush agrees much to Karishma’s shock but before he can walk away, Karishma yells that he only obeys Lakshmi nowadays.

Karishma even orders Ayush sarcastically to sleep peacefully since he is tired.

Putting his hands on Karishma's shoulder, Ayush calmly tells Karishma that he listens to Lakshmi because he trusts her.

After Ayush walks away, Karishma orders Lakshmi not to create distance between her and Ayush.

She further reminds Lakshmi that this is her last karvachaut with Rishi making Lakshmi teary.

Later, while Rishi is looking around for Lakshmi, he finds Lakshmi standing near the wall and a slow smile spreads across his face.

However, Karishma arrives there and Rishi gets out of his daydream.

Kiran also approaches Rishi and questions him if he will drop them off like he used to do.

Meanwhile, after dropping off the guest, Ayush is driving his car and he finds Shalu on the streets.

In the meantime, Lakshmi arrives there and yells that Rishi will not go with Kiran and Malishka since he is her husband.

Neelam reminds Lakshmi that Malishka is in Rishi’s life for a long time but Lakshmi adds she is Rishi’s wife now.

Even Harleen takes Lakshmi’s side while Rishi is happy seeing Lakshmi being possessive.

© Copyright tellybest.com, 2022, 2023. All Rights Reserved. Unauthorized use and/or duplication of any material from tellybest.com without written permission is strictly prohibited.
Cached Saved on: Monday 21st of November 2022 02:56:30 PMCached Disp on: Friday 9th of December 2022 05:05:35 AM