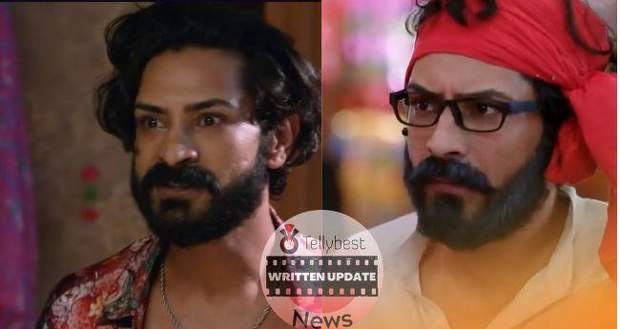 Rishi then asks Shalu if it helps him to regain Lakshmi’s friendship again he will do it.

Rishi then tries to walk away but he turns around and questions Shalu if Lakshmi will forgive him.

Shalu orders him to behave softly with Lakshmi, and Rishi nods.

While walking, Rishi starts practicing his apology in the hallway and keeps rejecting it as he feels he is not being gentle in his tone.

Rishi sitting on the floor practices his apology and stretches out his hand and closes his eyes.

Arriving on the spot, Ayush gets confused seeing Rishi apologizing and announces he has forgiven Rishi.

Rishi opens his eyes hearing Ayush’s voice and tells Ayush he is practicing his apology to Lakshmi.

Rishi slaps Ayush playfully when Ayush still does not believe him.

Afterward, Ayush suggests Rishi make Lakshmi even more jealous so then only Rishi and Lakshmi will be able to confess their feelings to each other and Rishi nods in agreement.

Ayush thinks to himself how much Rishi and Lakshmi love each other and they just need to realize this.

Later, in the room, Rishi starts irritating Lakshmi by announcing he has so many girlfriends and that Malishka is just one of them.

Lakshmi starts fuming with anger and questions Rishi why he is telling her this now and Rishi replies innocently that he is trying to make Lakshmi understand he is desirable among girls.

Further, picking up the phone, Rishi starts pretending as if he is talking to his “baby” while Lakshmi just glares at him.

Lakshmi slowly walks towards Rishi while he is busy saying how one particular person does not find him handsome.

However, Rishi's phone starts ringing, and Lakshmi bursts out laughing.

Rishi then questions Lakshmi if she is still angry at him while Lakshmi stares at him.

On the other hand, Balwinder sprays the sleeping drug on the flowers with an evil smile.

Meanwhile, in the room, Rishi accuses Lakshmi of being jealous and urges her to reveal what she is feeling inside her.

Rishi further informs Lakshmi about Ayush’s words and they get into an argument.

Ayush finds Shalu in the hall and starts complimenting her on her looks.

He even calls Shalu “biwi”(wife) and Shalu gets overwhelmed and smiles shyly.

Meanwhile, in the room, Rishi urges Lakshmi to forgive him and promises he will not let anyone come in between him and Lakshmi.

Lakshmi gets shocked when Rishi tells what she is thinking in her mind.

Looking at Rishi’s puppy eyes, Lakshmi decides to forgive him.

Ayush on the other hand notices Neha walking toward them and tries to make Shalu jealous but freaks out when Neha remarks she and Ayush look so good together.

Shalu even calls Ayush a monkey but Neha announces Ayush is a prince to her.

While Shalu exclaims Rishi and Lakshmi should arrive happily at the function, Neha locks her hand with Ayush and drags him to the function.

© Copyright tellybest.com, 2022, 2023. All Rights Reserved. Unauthorized use and/or duplication of any material from tellybest.com without written permission is strictly prohibited.
Cached Saved on: Monday 21st of November 2022 06:33:00 AMCached Disp on: Monday 5th of December 2022 12:58:12 AM