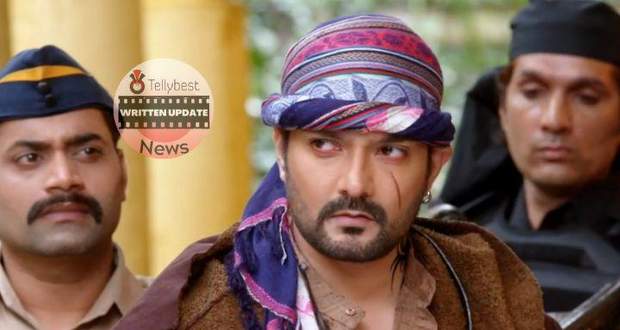 Today's Bhagya Lakshmi 12th September 2022 episode starts with a pregnant woman requesting Munish to let her go since she is here to see Lakshmi getting punished as Lakshmi is the reason for her husband’s illness.

She further accuses Lakshmi of being responsible for many people’s illnesses.

Hearing this, while Lakshmi and others look shocked, Munish orders the woman to close her mouth.

Ignoring his threat, the lady continues to beg for her and her baby’s life.

However, frustrated Munish pushes the lady away and she lands on the floor.

Due to the sudden fall, the lady starts screaming in pain while Munish taunts Lakshmi for being a killer like him.

He even offers Lakshmi a position in his group but Lakshmi just ignores him.

Afterward, Lakshmi goes to help the lady but she again starts accusing Lakshmi of being responsible for her suffering.

While sad Lakshmi is busy consoling the lady, irritated Balram announces that he will make the lady shut up.

However, when Balram goes to kick the lady’s stomach, Lakshmi stops him with her hand.

With fierce eyes, Lakshmi turns towards the lady and urges her to become brave.

Listening to Lakshmi’s moral speech, Munish gets angry and announces that he will shoot her.

Munish then points the gun at Lakshmi’s head and warns everyone not to make any sound otherwise he will shoot Lakshmi.

Before Lakshmi can say anything, Rishi roars in anger and orders Munish to stay away from his wife.

Rishi even puts Lakshmi in his arms while Munish puts a gun on Lakshmi’s head.

Hearing this, Malishka takes a leather shoe from Balwinder to throw at Munish so he kills Lakshmi.

The plan backfires as Munish starts coughing and everyone runs away using this opportunity.

Before Rishi, Neelam, the judge, and Virendra can walk away, some terrorists arrive and stop them.

While walking away, Lakshmi overhears Munish’s announcement who urges Lakshmi to get back otherwise he will kill Rishi.

In the courtroom, Rishi is busy arguing with Munish for Lakshmi.

Elsewhere, scared Lakshmi tries to get back to Rishi but some police officers arrive there and require Lakshmi to think rationally before taking action.

Elsewhere, while Malishka is worrying about Rishi, Abhay puts a hand on her mouth and orders her to stay out of trouble.

Balwinder, listening to their conversation, urges Malsihka not to enter the courtroom.

However, Abhay starts misbehaving with Balwinder.

It backfires as Balwinder announces that he will reveal Malishka and Kiran’s secret to everyone.

Meanwhile, in the courtroom, Munish orders Rishi to call Lakshmi but Rishi refuses.

© Copyright tellybest.com, 2020, 2021. All Rights Reserved. Unauthorized use and/or duplication of any material from tellybest.com without written permission is strictly prohibited.
Cached Saved on: Sunday 2nd of October 2022 07:15:24 AMCached Disp on: Thursday 6th of October 2022 04:05:49 PM