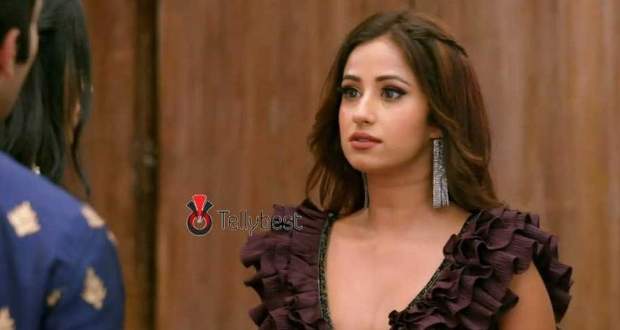 Further, Durga Devi comes there and tells Aliya and Amol that they should go to the police station.

Elsewhere, Karishma and Neelam are talking ill about Lakshmi saying that she is acting like a VVIP.

However, Harleen scolds both of them and tells Karishma to not talk ill about Lakshmi.

Just then, Rishi, Lakshmi, and Aayush come downstairs asking Neelam if she called for them.

Later, Lakshmi tells Aayush to make sure that Malishka and Kiran don't know that they doubt them teaming up with Balwinder.

Aayush later goes to Malishka and confronts her about her hiding something or someone in the guest room.

However, Malishka complains to Neelam about Aayush after which Malishka goes to boast to Lakshmi about it.

Lakshmi tells Malishka that she knows Malishka had teamed up with Panditji to harm her.

Aayush sides with Lakshmi and keeps questioning Kiran who keeps coming up with made-up pieces of evidence.

Neelam scolds Aayush and makes him sit in the pooja after which the pooja ends.

Afterward, Aayush goes to his room and gets angry at himself as he knows that Malishka is trying deathly attacks on Lakshmi and he can't do anything about it.

Meanwhile, downstairs, Lakshmi helps Virendra and tells him to rest while Virendra gets emotional and tells Lakshmi that he is thankful to have such a good daughter-in-law.

He tells her that he is proud to be a father figure to her and Lakshmi emotionally hugs him.

On the other hand, Soniya goes to Malishka's room and questions her and Kiran if they were involved in today's deathly attack on Lakshmi.

Malishka lies that she is too classy to do such a thing after which Soniya leaves telling her that she will not support her if it turns out to be false as she doesn't support criminal minds.

Soniya leaves while Malishka vents her frustration to Kiran.

Suddenly, Aayush comes there and raises his fist while coming near Malishka scaring her.

© Copyright tellybest.com, 2020, 2021. All Rights Reserved. Unauthorized use and/or duplication of any material from tellybest.com without written permission is strictly prohibited.
Cached Saved on: Friday 30th of September 2022 06:11:32 PMCached Disp on: Saturday 1st of October 2022 04:12:43 PM