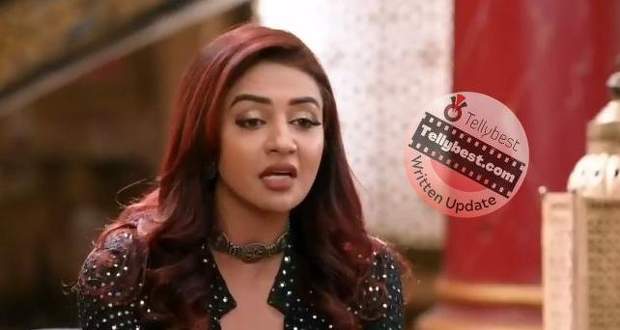 When Ayush closes Shalu’s eyes from behind, she teasingly questions him when he came out of the zoo.

Afterward, Ayush questions Shalu about what relationship they have with each other and Shalu tells him that she has a close relationship with him only.

Shalu further jokes that it would have been better if some other boys were behind her to make Ayush jealous.

However, Shalu then urges Ayush to stop the nonsense and Ayush tells her that he is glad Lakshmi is okay.

On the other hand, Rishi tells Malishka that she is wrong as Lakshmi can never do this and while Malishka looks at Rishi with puppy eyes, Sonal arrives there.

Sonal also puts the blame on Lakshmi and when Rishi tries to argue, she announces that Lakshmi has trapped him after marriage.

Rishi however angrily orders Sonal to close her mouth but Sonal argues that Malishka is the eyewitness.

She even yells that Lakshmi was trying to get back at Malishka by attacking Kiran and she has even pushed Kiran in front of the car.

Rishi who was tired of listening to Sonal’s yelling, announces that he has also seen how Lakshmi was trying very hard to save Kiran.

Even Neelam also sides with Malishka and informs Rishi that Lakshmi is guilty.

In the meantime, the police tell Rishi that they have the witness now so they need to arrest Lakshmi but Rishi begs them to wait till Kiran comes back to her senses.

After the police walk away, Sonal urges Rishi to understand Malishka who knew Rishi’s love for Lakshmi and that’s why she was keeping quiet.

Malishka also questions Rishi if he trusts Lakshmi or her and Rishi just walks away after announcing he will wait for Kiran.

Meanwhile, in the Oberoi mansion, Kiran informs Harleen and Virendra that Lakshmi is the reason behind Kiran’s accident.

Harleen, however, announces that Kiran is bluffing since she always finds a way to blame Lakshmi for everything.

Lakshmi arrives there at the same time and Neelam orders her to walk away as she is responsible for Kiran’s accident.

Lakshmi tries to change Neelam’s mind by yelling that she was trying to save Kiran but Neelam refuses to listen to anything.

Rishi enters the house just then and informs Neelam that she is wrong as he is sure Malishka is wrong now.

Neelam however orders Rishi to swear he will throw Lakshmi out if Kiran takes Lakshmi’s name while Rishi looks visibly upset.

On the other hand, Sonal happily tells Malishka that Lakshmi will go to jail and Malishka will happily marry her Rishi while Malishka expresses that she is scared.

In the meantime, Kiran comes back to her senses and the nurse informs Kiran that Lakshmi is alright.

Malishka arrives there at the same time and tries to hug Kiran who pushes her away.

Kiran even tells Malishka that she knows Sonal is the reason behind her accident and when she announces she will tell Lakshmi the truth, Malishka orders her to keep quiet.

While Malishka is struggling to calm Kiran down, Sonal overhears them.

Elsewhere, in Oberoi's mansion, Virendra informs furious Neelam that Lakshmi can not do this while Kiran orders Rishi to swear on her head he will throw Lakshmi out if she is proven guilty.

© Copyright tellybest.com, 2022, 2023. All Rights Reserved. Unauthorized use and/or duplication of any material from tellybest.com without written permission is strictly prohibited.
Cached Saved on: Wednesday 25th of January 2023 06:04:03 PMCached Disp on: Monday 6th of February 2023 05:34:39 AM