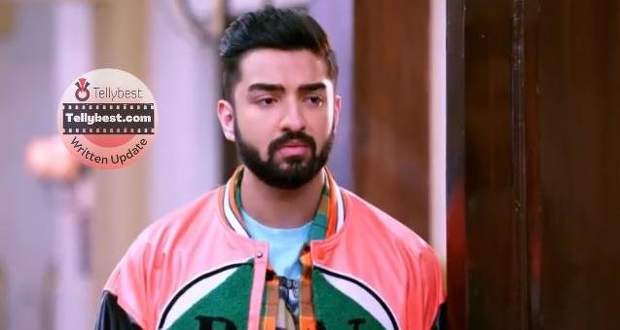 Today's Bhagya Lakshmi 13th January 2023 episode starts with Sonal waiting for Malishka as she is worried that she will get caught.

Malishka informs Sonal that Devika did not hear their conversation at all and Sonal questions Malishka why she took so much time then.

In reply, Malishka arrogantly tells Sonal that for a change Harleen yelled at Devika for being suspicious without hearing anything.

Though Sonal feels relieved, she orders Malishka to marry Rishi as soon as possible to avoid getting caught.

Malishka yells in frustration that Lakshmi must have done black magic on Rishi that’s why he is not agreeing to the marriage.

When Sonal announces that Lakshmi will soon exit Rishi’s heart too, overconfident Malishka says that Rishi will not even remember Lakshmi’s name.

Meanwhile, on the streets, Balwinder threatens Lakshmi to not let Shalu, Bani, and Neha marry anyone and even if Lakshmi does not agree, he will kill Rishi by whispering in Lakshmi’s ear.

Lakshmi gets numb in shock while the flashback of her father’s promise plays in front of her eyes.

Back in present, Lakshmi stares at Rishi running towards Balwinder like a raging bull.

In the meantime, in Bajwa's house, the money falls from Rano’s hand and Bani asks her where she is getting this much money.

On the other hand, in the Oberoi mansion, Karishma orders Neelam not to take stress as Lakshmi is out of Rishi’s life and Malishka-Rishi will be married soon.

Neelam expresses that Rishi should not have done this and she is worried that maybe her relationship with Kiran will not be the same again.

Hearing this, Karishma blames Lakshmi for Rishi’s actions and announces that since she is out of Rishi’s life they have to make sure Lakshmi and Rishi never get close again.

Back on the streets, Lakshmi comes between Rishi and Balwinder just when Balwinder is about to stab Rishi by mistake, Lakshmi gets stabbed in her back.

While Balwinder stands there in silence, Rishi apologizes to Lakshmi and urges her to come with him to the doctor’s clinic.

Balwinder again raises the knife to attack Rishi but Rishi orders him to not do any nonsense.

Balwinder watches in confusion as Lakshmi expresses how she feels about telling everyone about her husband’s dark mistake.

Lakshmi orders Rishi not to behave with Balwinder this way as he is her soon-to-be husband.

Shocked by this revelation, Rishi questions Lakshmi if she is mad but Lakshmi asks him if he has done right.

She further orders Rishi to think about Malishka only but Rishi announces that he will not let Lakshmi deal with the consequence of his mistake.

He even adds that he is still Lakshmi’s friend when Lakshmi informs him that there is no relationship between them.

Rishi continues begging Lakshmi not to marry Balwinder but Lakshmi orders him to forget about her as neither they are friends nor anything else.

Balwinder stops Lakshmi by ordering Rishi to walk away just like Lakshmi wants and he also taunts Rishi by saying that he will fulfill Lakshmi’s all wishes.

While Balwinder is busy ordering people to walk away, Rishi looks at Lakshmi with a hurtful look but Lakshmi masks her emotions.

Grabbing Balwinder’s collar, Rishi yells in a cold voice that he will kill Balwinder today to spare Lakshmi from his grip, and he does not care if he will go to jail for it.

Lakshmi, however, takes Rishi to an isolated place and orders him not to interfere in her life anymore.

She further orders Rishi to walk away with her joined hands and in a broken voice.

Afterward, Rishi is driving the car with a poker face while Lakshmi’s words echo in his mind whereas Lakshmi falls to the ground and starts sobbing.

Balwinder just watches Lakshmi walking like a doll who does not have any emotion and Rishi is also sitting in his car in distress.

Looking at Lakshmi walking away, Balwinder gets happy thinking Lakshmi will be Lakshmi Sood very soon.

Back in Bajwa's house, Rano lies that she has borrowed this money from someone for Neha’s marriage and also adds that Lakshmi’s marriage will make Neha happy.

Rano walks away after ordering Bani to stay within her limits.

Meanwhile, in a cafe, Kiran orders Malishka to move on from Rishi as he is not the same anymore and she does not want Rishi for her anymore.

However, Malishka announces that she will change Rishi into an ideal husband and after Kiran walks away, Malishka angrily mutters that if Rishi doesn't agree to the marriage she will kill herself and Rishi both.

Later, Malishka and Sonal join the Oberoi family in the living room while they are discussing Rishi-Malishka's marriage.

Meanwhile, in Bjawa's house, Lakshmi arrives with Balwinder on her toe who orders everyone to eat sweets as Lakshmi has agreed to the marriage.

However, when Balwinder urges Lakshmi to say yes, Lakshmi utters no without thinking.

© Copyright tellybest.com, 2022, 2023. All Rights Reserved. Unauthorized use and/or duplication of any material from tellybest.com without written permission is strictly prohibited.
Cached Saved on: Wednesday 25th of January 2023 09:34:14 AMCached Disp on: Thursday 9th of February 2023 04:34:39 AM