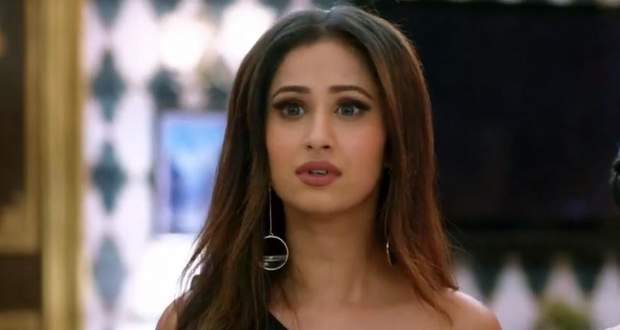 Today's Bhagya Lakshmi 13th July 2022 episode starts with Ayush happily informing Lakshmi about how Balwinder will speak the truth after having this magic drink.

However, while walking, Ayush unknowingly steps on some broken glass pieces and puts the special glass on the tray.

Seeing Ayush wincing in pain, everyone starts asking him if he is okay or not.

At the same time, Rishi arrives there and asks Ayush about Balwinder’s drink.

On one hand, Balwinder pleads with Rishi for water, and on the other hand, Virendra along with others announces that this is the perfect plan.

While Rishi beats Balwinder to know the truth, Malishka praises Balwinder in her mind for not spilling her name despite all the beating.

Rishi gets an idea and orders Aysuh to show the way he steps on the broken glasses and put the glass on the tray.

After Ayush shows him the way, Rishi picks up three possible glasses and takes one to Balwinder to drink.

While Rishi and Ayush are busy with Balwinder, Malishka mixes sleeping pills in the two remaining glasses without anyone noticing.

After drinking all three mixed juices, Balwinder tells Rishi everything about himself and how much Lakshmi is pure.

Rishi repeats his question and Balwinder tries to say the name but he falls asleep.

Rishi then tells everyone that once Balwinder wakes up he will know the truth.

Hearing this, Malishka along with Karishma expresses their concerns about Balwinder staying there but Rishi is adamant.

Later in the room, Ayush tells Rishi that their plan has not flopped but just got delayed.

In the middle of their conversation, Lakshmi approaches them with cold water.

Taking the water, Ayush walks away to give Rishi and Lakshmi some space.

When Lakshmi tells Rishi that she has not seen this side of him, Rishi replies that he is willing to do everything for Lakshmi and his family.

On the other hand, Kiran scolds Malishka for behaving stupidly.

Instead of listening, Malishka says that she will take Balwinder out of her way.

Though Kiran is not happy with Malishka’s plan, she agrees anyway.

However, Ayush overhears them.

© Copyright tellybest.com, 2022, 2023. All Rights Reserved. Unauthorized use and/or duplication of any material from tellybest.com without written permission is strictly prohibited.
Cached Saved on: Tuesday 22nd of November 2022 07:12:43 AMCached Disp on: Saturday 3rd of December 2022 02:56:06 PM