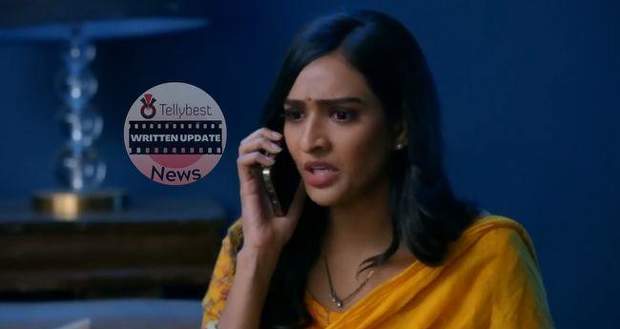 Today's Bhagya Lakshmi 13th November 2022 episode starts with Shalu calling Ayush for help as she notices a car following her.

Picking up the call, Ayush greets Shalu very happily and Shalu informs him about someone following her.

Before Ayush says something, he notices gifts in the back seat and tells Shalu that the car will go away in just a few minutes.

Shalu turns after hearing that and gets stunned to see the car driving in a different direction.

After cutting the call, Shalu gets surrounded by some goon who starts eve-teasing her.

Shalu calls Ayush for help again while the goons offer her a ride in a creepy tone.

Ayush arrives there at the same time and Shalu complains to him about eve-teasing.

Ayush tells Shalu that the thugs are weird, teasing Shalu even after seeing her face while Shalu just rolls her eyes.

Shalu then brags about Ayush being a very good boxer who will teach the thugs a lesson but Ayush runs away from there.

On the other hand, angry Lakshmi scolds Rishi for not taking her side in front of Kiran and yells that Rishi behaves so sweetly when they are alone but in front of other people Rishi just forgets about her.

Afterward, Lakshmi storms away from there while Rishi exclaims that Lakshmi has started behaving like a real wife.

Meanwhile, Ayush arrives again on the spot with some police and announces that he never takes the law into his hands until it is necessary.

Looking at Ayush’s face, Shalu suddenly feels overwhelmed and thanks Ayush for his help.

In the meantime, Rishi finds Lakshmi cleaning the dishes angrily in the kitchen and calls her name but Lakshmi orders him to go away.

To attract Lakshmi’s attention, Rishi picks up a chili and names it Lakshmi and it works as Lakshmi spun around quickly.

Rishi then tells Lakshmi that he did not take Lakshmi’s side today because he knew Lakshmi can fight her own battles without anyone’s help and he does not want anyone to think Lakshmi is weak.

He even tells Lakshmi that he likes it when Lakshmi fights with other people for him which makes Lakshmi blush.

Elsewhere during the car ride, Ayush notices Shalu’s smiling face and mentions it to Shalu.

Shalu then tells Ayush that she is glad Ayush used his brain today and starts comparing him with Billu.

She even adds that every girl in the villages was head over heels in love with Billu, but he only used to hang out with her.

Feeling steam coming out of his ear, Ayush stops the car and starts showing his biceps to Shalu.

He orders Shalu to bring Billu so he can fight with him and Shalu softly adds that Billu is her cousin.

Hearing this, Ayush changes his tone and announces that he already loves Billu now.

He even questions if Billu is Shalu’s brother like the way he is Ahana, Soniya, and her’s and Shalu slaps him.

Later, Ayush stops the car in front of Shalu’s house and they start hanging out.

Neha approaches them at the same time and urges Ayush to drop her too but Ayush denies it.

After Ayush walks away, Neha scolds Shalu for not telling Ayush to stop him.

On the other hand, Lakshmi starts recalling Rishi and her sweet memories together and feels her heart flutter while a grin spreads across her face.

© Copyright tellybest.com, 2022, 2023. All Rights Reserved. Unauthorized use and/or duplication of any material from tellybest.com without written permission is strictly prohibited.
Cached Saved on: Monday 21st of November 2022 01:33:07 AMCached Disp on: Thursday 1st of December 2022 11:45:33 AM