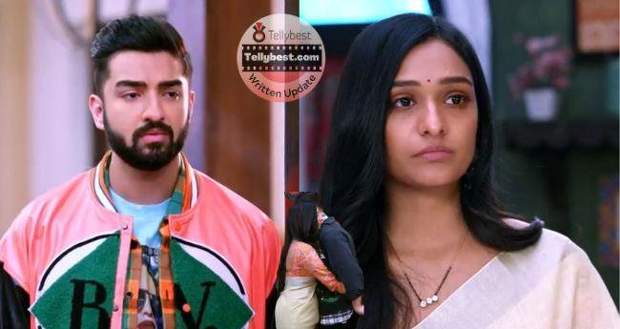 Today's Bhagya Lakshmi 14th January 2023 episode starts with Neelam telling Malishka that she wants her to marry Rishi and live happily with each other.

Malishka tells her that she is sure that after her marriage to Rishi, everything will be all right.

Just then Rishi comes there and takes Malishka with him without question.

Meanwhile, Rano is unsure of Balwinder's claim that Lakshmi has agreed to marry him.

At the same time, Shalu and Bani tell Balwinder to go out and Lakshmi will not marry him and she cannot say yes.

However, Balwinder sets Shalu aside and asks Lakshmi to tell everyone that she has said yes in front of Rishi.

Lakshmi is in turmoil thinking about the time when she said yes to Rishi and with great effort tells everyone she has said yes to Balwinder.

Shalu does not believe in Lakshmi’s decision and tells him that he must have blackmailed Lakshmi into saying yes and that she will call the police and Rishi to sort out this matter.

However, Lakshmi tells her to not bother as this is her decision and no one forced her into it.

Rano pretends to look concerned and asks Lakshmi if she means what she has said and will not turn back on her word at the time of marriage.

Lakshmi assures her that she will do no such thing.

Later, Rano praises Balwinder for doing the impossible and tells him to deliver her payment on time or else she will not let this marriage happen.

Meanwhile, Rishi is driving quietly while Malishka looks at him worriedly and asks him where he is taking her.

In the meantime, Bani and Shalu are worried to hear Lakshmi’s decision and wonder how they can stop them.

Bani feels scared at this new turn of events while Shalu assures her that God is with them and he will help them come out of this problem.

Later, Lakshmi recalls how she spotted a strange woman committing suicide on her way back and saved her at the last minute.

The strange woman somehow knows Lakshmi and blames her for forcing her to commit suicide.

The woman introduces herself as Kamli and tells Lakshmi that Balwinder has made promises to marry her but he has refused to marry her despite knowing that she is pregnant with his child.

She tells Lakshmi that she was hoping that she will refuse Balwinder and then he will be forced to marry her but she said yes and now her life is finished.

Kamli’s tale shocks Lakshmi and she tells her that she did not know about her.

Lakshmi also tells Kamli to not take her life which is a blessing of God to humans.

She assures Kamli that she will help her and it is the reason God has sent Lakshmi to her.

Kamli thanks her for being there for her and asks her to not tell Balwinder about her or else he will kill her.

Later, Lakshmi feels guilty for causing pain to Kamli in her effort to make everyone in her family happy.

Lakshmi ponders her situation and after careful thought comes to a decision that she will make Kamli and Balwinder marry each other.

Meanwhile, Balwinder is discussing his plans with Rano who tells her that she will get them married in two days and she tells him that he will have to take Lakshmi away after his marriage.

After a while, Rano sees Bani and Shalu comforting Lakshmi and is about to shoo them away when Rishi arrives with Malishka.

Rano decides to keep Rishi away from Lakshmi so that he does not turn her mind but Rishi is adamant to meet Lakshmi and goes inside forcefully to meet Lakshmi.

© Copyright tellybest.com, 2022, 2023. All Rights Reserved. Unauthorized use and/or duplication of any material from tellybest.com without written permission is strictly prohibited.
Cached Saved on: Wednesday 25th of January 2023 09:13:52 AMCached Disp on: Monday 6th of February 2023 06:02:13 AM