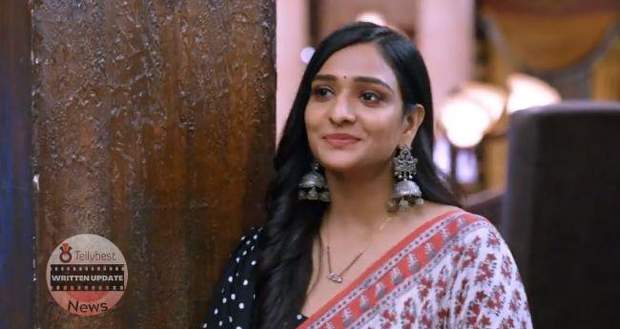 Today's Bhagya Lakshmi 14th November 2022 episode starts with Rishi locking the door behind him and ordering Lakshmi to tell him why she ran away from the kitchen like this.

He even adds that he will not let Lakshmi walk away until she answers to which Lakshmi gives the excuse that she needs to fold the clothes.

Lakshmi intentionally folds the clothes slowly and thinking Lakshmi is doing this to avoid his question, Rishi offers to help.

After Rishi quickly puts the clothes messily in the closet, Lakshmi scolds him for increasing her work.

While Lakshmi thinks Rishi should drop the topic, Rishi somehow hears Lakshmi’s inner voice, yells he is dropping the topic and walks away angrily.

After Rishi walks away, Lakshmi feels sad thinking that she does not know how to tell Rishi that she loves him.

Meanwhile, Karishma enters Neelam’s room and announces that they need to separate Lakshmi and Rishi.

Karishma even reminds Neelam that everyone knows about Lakshmi being Rishi’s wife so they need to take action fast.

Neelam replies that only Malishka can replace Lakshmi in Rishi’s life but for that Malishka needs to learn cunning ways just like Lakshmi.

On the other hand, Lakshmi gets shocked to see Rishi standing near the closet and steps on his foot by mistake.

Rishi winces in pain while Lakshmi orders him to collide with her again if he does not want to get bitten by a black dog.

Rishi however denies it and orders Lakshmi to spill her reason in a sweet voice making Lakshmi blush.

In a low whisper, Lakshmi tries to confess to Rishi that she felt something in the kitchen while her heart starts beating faster.

She then confesses that Rishi is very important to her while Rishi gazes at Lakshmi with intensity.

On one hand, Rishi wishes Lakshmi to confess what he wants to hear; on the other hand, Lakshmi thinks she is not able to confess her feelings.

Lakshmi however tells Rishi that she will vanish Malishka if she tries to come close to Rishi while Soniya overhears it.

Soniya walks away from there to inform Malishka about it while gritting her teeth in anger.

Meanwhile, Rishi changes the topic and orders Lakshmi to say sorry but Lakshmi orders him to collide with her.

While Rishi hits Lakshmi’s head with his, they get both lost in each other eyes.

Afterward, Rishi and Lakshmi get into a funny banter when Lakshmi announces that she has work in the kitchen but Rishi thinks Lakshmi does not like spending time with him.

On the other hand, Karishma orders Kiran to make sure Malishka does not stop until she snatches Rishi away from Lakshmi.

Afterward, Kiran goes into Malishka’s room to lift Malishka’s spirit and orders her to show Lakshmi the real her.

In the meantime, Rishi furiously scolds Ayush for making a wrong presentation.

Lakshmi tries to stop Rishi from yelling but Rishi screams that if Malishka was here she wouldn’t have made any mistakes.

Haring this, Lakshmi feels shocked while Kiran and Karishma smirk.

Later, Lakshmi again tries to talk to Rishi but Rishi yells that this time Ayush is at fault.