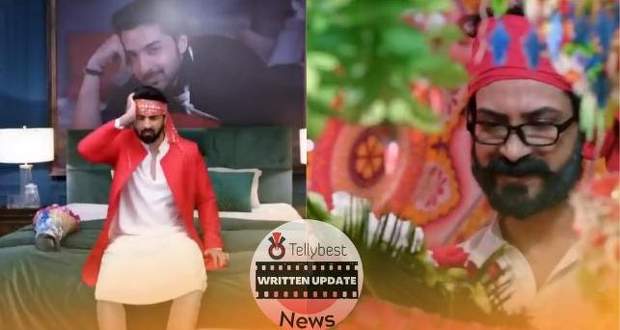 Today's Bhagya Lakshmi 14th October 2022 episode starts with Rishi throwing Balwinder to the bed while Balwinder announces Rishi cannot beat him just because he is a boxer.

On the other hand, excited Malishka is telling Kiran about Neelam giving her instructions for being with Rishi during Dahan when she gets a call from Rishi.

Meanwhile, Balwinder screams that he will tell everything in front of the police and he even feels confused if Malishka has listened to his words or not.

Malishka gets shocked to hear Rishi and Balwinder’s voices in the call and starts panicking.

Lakshmi is chatting with Bani and Shalu when Ayush arrives and starts pulling Shalu’s leg.

Ayush questions Lakshmi about Rishi while Shalu just glares at him.

Lakshmi informs Ayush that Rishi must be wandering with some “apsaras” (angels) but Ayush announces Rishi only thinks about Lakshmi.

On one hand, Rishi is beating Balwinder like a raging bull; on the other hand, Malishka enters the Oberoi mansion through a window and starts a fire in the kitchen so the fire alarm goes off and the door opens automatically.

Balwinder tells Rishi in frustration that indeed he wants to marry Lakshmi when Rishi presses his head hard on the side table.

Rishi gets red in anger after hearing Balwinder’s words and starts beating Balwinder even harder.

Balwinder runs away as soon as the door opens and Rishi follows him.

Malishka breathes a sigh of relief when she notices Balwinder running away and she also escapes through the kitchen window.

Later outside, while Malishka is informing Kiran about Balwinder’s arrival, she gets a call from Balwinder who accuses Malishka of betrayal.

Malishka informs Balwinder that she is the one who put the fire alarm.

Malishka cuts the call in irritation and Kiran orders her to take Balwinder out of her life.

During his chasing of Balwinder, Rishi gets a blow on his head but fails to catch Balwinder.

On one hand, everyone gets shocked to see Rishi with a head injury; on the other hand, Balwinder's friend informs him about Malishka's plan.

Balwinder tells the guy that he was considering not killing Rishi as he is Malishka's love but now he will kill Rishi and Malishka both.

Meanwhile, Lakshmi along with others questions Rishi about the injury, and Rishi narrates how he caught Balwinder and was trying to get the truth out of him but he escaped.

Lakshmi does Rishi's nursing with her dupatta and Rishi narrates how he caught Balwinder and was trying to get the truth out of him.

Later, while Lakshmi urges Rishi to take a rest, Ayush starts trash-talking about Balwinder but before he can take Malishka's name, Lakshmi stops him.

© Copyright tellybest.com, 2022, 2023. All Rights Reserved. Unauthorized use and/or duplication of any material from tellybest.com without written permission is strictly prohibited.
Cached Saved on: Monday 21st of November 2022 03:58:19 AMCached Disp on: Wednesday 7th of December 2022 01:20:34 PM