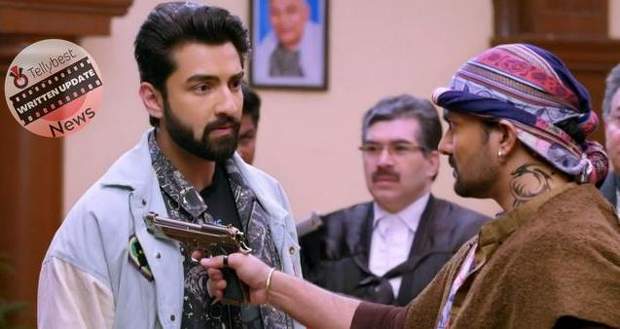 Shalu and Lakshmi push him together to save the Oberois.

However, Lakshmi asks Shalu why she came and Shalu says that wherever Lakshmi would go she would follow.

Meanwhile, Dadi and Devika arrive outside the court and Dadi asks Devika to tell Neha about her mother.

Elsewhere in an auto, Neha is getting worried about her mom Rano when Devika’s call comes and Dadi talks from her side.

Before she can tell anything about Rano, Neha begins crying but Dadi scolds her and tells her that she is still in court and nothing has happened to her.

On the other hand, Aayush gets frustrated when he can do nothing about the situation and his family in danger and hence ditches the police and escapes with Bani.

While in the fear of being alone Rano follows them too and they begin managing to escape and hide from the terrorists.

Malishka keeps getting worried about Balwinder’s warning and tells Abhay that she has to do something to be heroin in front of Neelam’s eyes else everything would go in vain and she will be punished if Balwinder exposes her later.

She manages to come to the Oberois and unties them while the terrorists were busy.

Neelam says that she knew no matter whether Lakshmi comes or not but she knew Malishka would definitely come.

Later Rishi thinks this is the right time to escape and begins walking toward the door.

Suddenly a knife flies in front of him and stabs a wall, making everyone halt.

Munish gets furious and spots Malishka as the newcomer and grabs her hair threatening her with the knife.

Rishi punches his hand and fights him off while Munish infuriates at his actions.

He presses the trigger at Rishi when suddenly Lakshmi comes and pushes him aside.

She takes the bullet instead of Rishi, which pierces her arm.

Malishka gets jealous that Lakshmi always takes her credit and saves Rishi even though she risked her life to be the heroin in front of Neelam.

Rishi and Lakshmi begin conversing while Rishi says Lakshmi should think about herself too.

On this Lakshmi says she wouldn’t be able to live without him while Rishi reciprocates.

Suddenly Munish gets irritated and points his gun at Rishi when Aayush comes in and turns the events.

Everyone begins kicking and fighting off the terrorists while Aayush makes a plan of escape.

He takes a terrorist’s mask and fakes hostage everyone to safely take them outside.

Meanwhile, Rishi comes to save Karishma and Kiran when Munish gets up and points the gun at him.

© Copyright tellybest.com, 2020, 2021. All Rights Reserved. Unauthorized use and/or duplication of any material from tellybest.com without written permission is strictly prohibited.
Cached Saved on: Friday 30th of September 2022 06:23:02 PMCached Disp on: Saturday 1st of October 2022 01:01:35 AM