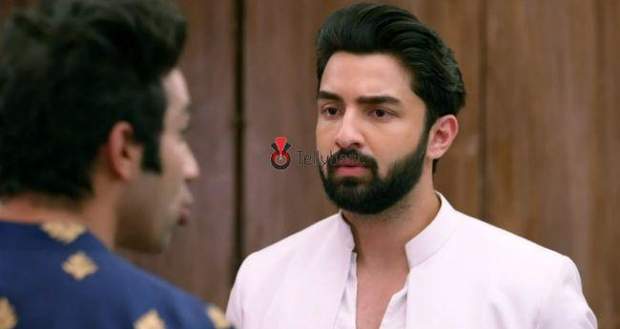 However, angry Malishka announces that she will not back out till she gets her Rishi.

This makes Ayush even angrier and he grabs her hand to show her proof of Lakshmi’s importance.

Kiran tries to stop him but Ayush just shrugs and urges them to relax as he doesn’t have enough proof to put them in jail.

Elsewhere, Virendra hugs Lakshmi tightly and orders her to stay.

Even Harleen wishes that God gives her remaining life to Lakshmi.

At the same time, Ayush arrives there with Malishka and Kiran and shows them the emotional moment between Lakshmi and Virendra.

He even tells Malishka that this is proof that Lakshmi is staying in the Oberoi mansion.

He also orders Malishka not to harm Lakshmi again otherwise he will make her life complicated.

On the other hand, Harleen requests Lakshmi to stay with Rishi as he loves her very much and is scared of losing her.

Meanwhile, in the guest room, Kiran bitches about Lakshmi’s fate which always support her.

Hearing this, Malishka declares that she will do something different which will make Lakshmi lose as she is born a winner not a loser like Lakshmi.

On the other hand, Lakshmi hugs Rishi suddenly while he is talking on call.

Lakshmi’s gesture surprises him but he calms her down by promising her that he will always stay by her side.

He even urges Lakshmi to smile as it looks good on her.

Hearing this, Rishi questions her why she never mentioned it before.

This makes Lakshmi angry and announces Rishi always fights with her.

During the argument, Rishi mentions that Malishka will take care of him if Lakshmi leaves.

Jealous Lakshmi urges him to go to Malishka’s room if he wants.

Afterward, Rishi falls on the bed which makes Lakshmi laugh out loud.

Looking at Lakshmi’s smiling face, Rishi requests her not to make him bored.

While going to the bathroom, Lakshmi collides with Rishi who locks her between his hands and informs her that Lakshmi’s eye speaks more.

He then informs Lakshmi that he has to go to Bangalore for a while due to an international meeting.

Hearing this, Lakshmi gets upset but refuses to stop Rishi from leaving.

Disappointed Rishi declares that he will stay in Bangalore.

He even falls but Lakhsmi saves him while telling him that no one can irritate him, like her, not even Malishka.

Later during the dinner, Harleen suggests Rishi take Lakshmi with him to Bangalore.

© Copyright tellybest.com, 2020, 2021. All Rights Reserved. Unauthorized use and/or duplication of any material from tellybest.com without written permission is strictly prohibited.
Cached Saved on: Saturday 1st of October 2022 10:13:50 PMCached Disp on: Thursday 6th of October 2022 03:38:00 PM