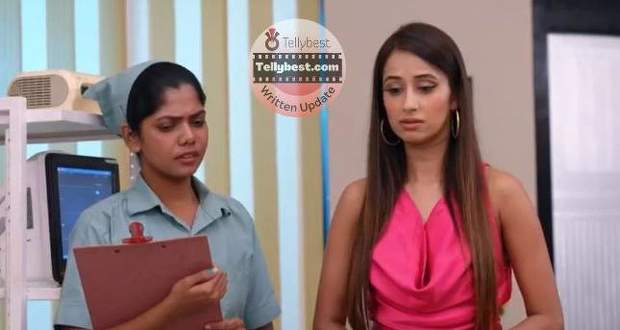 Today's Bhagya Lakshmi 15th December 2022 episode starts with Kiran taking Lakshmi’s name as the culprit behind her accident and asking the police to arrest her.

Lakshmi denies the accusations made against her and defends herself by saying that she has not done anything to Kiran.

Virendra and Dadi assure Lakshmi that they believe in her while Rishi says that he will come after Lakshmi and release her on bail.

Rishi says that Lakshmi is not lying and has not done anything wrong which angers Malishka and she asks if her mother is lying.

Rishi tells Malishka and Kiran that they may have misunderstood something and goes after Lakshmi as the police take her away.

However, Ayush and Shalu stop the police in the corridor and present the bail papers for Lakshmi.

The police release Lakshmi after seeing the bail papers and ask her not to leave the country without their permission.

Lakshmi and Rishi thank Ayush and Shalu for their help while Ayush reveals that it was Shalu’s idea as she was feeling uneasy.

The family members leave for home while Malishka and Sonal celebrate how they succeeded in framing Lakshmi.

Kiran says that she feels guilty for blaming Lakshmi for her accident when she was the one who saved her.

Malishka and Sonal ask Kiran if she has changed her side to which Kiran asks Sonal to get out of the room as she is turning Malishka into a murderer.

Sonal leaves the room with a sour face with Malishka going after her as Kiran asks her to go out too.

Kiran worries about Malishka’s wrongdoings and gets nervous about the consequences of the crimes that she is committing.

Meanwhile, after reaching home, Neelam reminds everyone about the importance of the next day as the final hearing of Rishi and Lakshmi’s divorce will take place.

Rishi and Lakshmi get stunned to hear that news and worry about their marriage as Neelam announces that she will make sure that they get divorced.

Lakshmi sheds tears while Rishi looks at Neelam and Lakshmi with confused and pained eyes.

Back at the hospital, Sonal tells Malishka that they have dug the coffin for Lakshmi and just need a little push to throw her inside.

Sonal tells Malishka that they will use their brahmastra on Rishi which will act as the final strike to his and Lakshmi’s marriage.

Virendra tries to explain to Neelam that Rishi loves Lakshmi but she does not admit it and is determined to separate them.

On the other hand, as Lakshmi asks for a solution to the situation to Rishi, Rishi answers that he does not know anything.