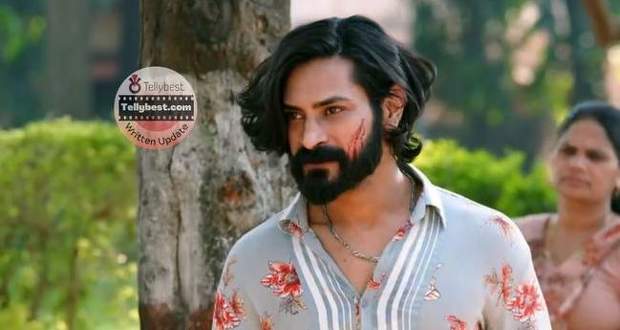 Today's Bhagya Lakshmi 15th January 2023 episode starts with Rano asking Malishka how come she does not know the reason for Rishi coming here as she is with him only.

Irritated Malishka exclaims that she thought Rishi is taking her on a fancy date but her dream is unfulfilled.

At the same time, Neha sarcastically tells Malishka that she is surprised to see high-class Malishka here.

When Rano mentions that Rishi is also here, Neha happily announces that now Rishi will take Lakshmi home with him so Rano will not need to cut her pocket money anymore.

Rano orders Neha to close her mouth otherwise she will slap her.

Meanwhile, Rishi drags Lakshmi out of the room, and Shalu and Bani think Rishi is here to win Lakshmi’s heart again.

Once in the hall, Rishi orders Lakshmi and Malishka both to stand together and he yells that Lakshmi’s words have pierced his heart.

Meanwhile, in Malishka’s home, Sonal informs Kiran about Rishi taking Malishka with him somewhere in a panicked voice causing Kiran to get angry and she questions Sonal why no one in the Oberoi family stops him.

Back in Bajwa's house, everyone watches in anticipation as Rishi kneels in front of Lakshmi and takes out a ring from his pocket.

However, Shalu and Bani’s smile fade as Rishi asks Malishka to marry him while maintaining his gaze on Lakshmi.

Malishka jumps in happiness and agrees to marry Rishi whereas tears streams off Lakshmi’s eyes but she quickly dries those tears and her face turns hard.

Recalling Lakshmi’s words about loving Malishka, Rishi announces that he is not a cheater and he did not have any option.

Rano smirks seeing this and the whole Oberoi family witness Rishi hugging Malishka and Lakshmi standing there with a poker face.

To give it a more dramatic effect, Rano welcomes them in a cheerful voice and urges them to see Malishka’s ring.

Afterward, Neelam and Karishma both compliments Rishi and Malishka for this and give Lakshmi dirty looks.

Ayush scolds Rishi for hurting Lakshmi and Harleen also asks Rishi why he did it.

At the same time, Rano gives everyone sweets to eat after announcing Lakshmi and Balwinder’s marriage.

Meanwhile, Balwinder is celebrating his win by drinking alcohol and orders Guddu to bring some guys and a big band for his wedding on a call.

Guddu reminds Balwinder about his other two marriages but Balwinder announces that Lakshmi is his last one as she is the love of his life.

Back in Bajwa's house, the sweet drops from Harleen’s hand in shock whereas Karishma thinks if the sweet was classy she would have eaten it.

Meanwhile, Malishka chuckles whereas Ayush, Virendra, and Harleen yell at Rano for choosing a Balwinder-type goon for Lakshmi.

Rano announces that it was Lakshmi’s decision and when Shalu proceeds to tell about emotional blackmail, Lakshmi announces it is her own decision.

Virendra begs Lakshmi to say no to the marriage if she really considers her father.

Hearing this, Ayush urges Lakshmi to back out and he begs Rishi to stop Lakshmi but Rishi stands like a puppet.

After Rishi walks away with Malishka, Neelam and Karishma also walk away feeling happy.

On one hand, Malishka questions Rishi if he proposed to her under pressure; on the other hand, Virendra and Harleen walk away after bidding Lakshmi emotional goodbye.