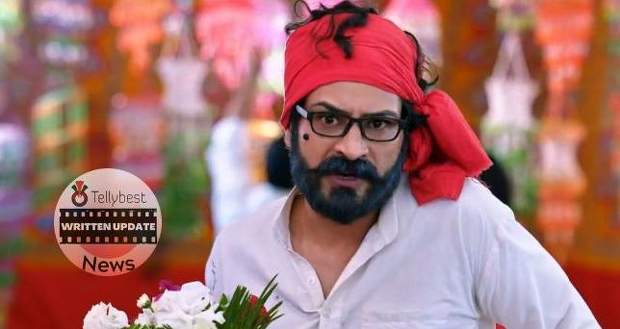 Lakshmi tells him that he needs to be careful in future and find out what Balwinder is doing here despite the threat of arrest.

Meanwhile, Guddu talks sense into Balwinder to not become bait for Malishka.

Balwinder angrily tells him that he will do his job so suavely that no one will know what hit them and teach Malishka a lesson.

Meanwhile, Malishka’s mother tells her to confess everything about Balwinder to Rishi before Rishi catches him.

On the other hand, Rishi is upset with Balwinder and tells Lakshmi that he wants to burn him instead of Ravan.

Lakshmi tells him that he does not need to have involved himself in a fight with Balwinder as he is dangerous and could have hurt him.

After a while, Laxmi loses her footing and falls into Rishi’s arms.

Both Rishi and Laxmi are lost in each other's eyes when Malishka comes in and shout at Rishi.

Malishka tells him that she needed to talk about something important to him and she will talk to him alone.

Later, Malishka tests Rishi's love for her by counting to five.

Meanwhile, Rishi comes to Malishka as she finishes her counting which gives her hope.

Shalu enjoys Lakshmi’s jealousy and tells her to understand what this jealousy indicates while Lakshmi looks innocently.

Meanwhile, Malishka hugs Rishi and tells her that she loves him.

Rishi frees himself from her hold and tells Malishka that they cannot talk in their room as Lakshmi will be hurt.

On the other hand, Balwinder enters the Oberoi’s house.

Later, Malishka accuses Rishi of not loving her anymore and reminds him of his reason for marrying Lakshmi.

Just then, Guddu comes to Malishka and gives her Balwinder’s note to meet him in the guest room.

After a while, Malishka talks nonsense to Rishi and goes to Balwinder.

In the meantime, Rishi suspects Malishka of hiding something and decides to find out about her.

He sees Balwinder's note torn into pieces and tries to read it unsuccessfully.

On the other hand, Neelam comes to the guest room where Balwinder is about to attack her but hides realising that she is not Malishka.

As Neelam is about to leave, she collides with Malishka who is coming at speed.

Balwinder thinks that Malishka has purposely sent Neelam and thinks of playing his trick before Malishka plans something else.

On the other hand, Lakshmi questions Rishi about his talk with Malishka.

Elsewhere, Virendra is standing near Ravan's pyre when it starts to shake while Aayush watches from afar.

Later, Malishka manipulates Neelam into taking her to another room instead of the guest room.

After a while, Rishi tells Lakshmi that Malishka was only discussing dresses for Diwali.

Just then, Shalu comes and takes Lakshmi away to keep her from questioning Rishi.

Later, Dadi congratulates Rishi because Lakshmi is finally behaving like a wife.

© Copyright tellybest.com, 2022, 2023. All Rights Reserved. Unauthorized use and/or duplication of any material from tellybest.com without written permission is strictly prohibited.
Cached Saved on: Monday 21st of November 2022 06:44:18 AMCached Disp on: Thursday 1st of December 2022 12:21:24 PM