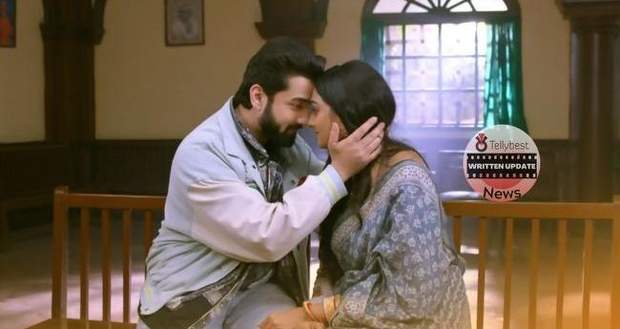 Meanwhile, Munish punches Rishi in the courtroom and he falls over a bench.

Rishi notices a smoke bomb and ignites it asking Karishma, Kiran, and Sonia to run after him.

However, they fail in the escape and Munish slaps Kiran in fury.

Rishi notices the absence of the trio but thinks that he should make the other people safe first.

On the other hand, the refugees including the Oberois are stuck in the court because their escape door is also being guarded by terrorists.

Lakshmi senses the absence of Rishi but comforts Neelam that he will come to save everyone whilst she goes to look for him.

Meanwhile, Neelam curses Lakshmi for the happening, and Shalu and Lakshmi fall into a little argument.

Elsewhere, Malishka comes to Abhay and tells her about Kiran.

Abhay suggests his idea about dealing with a terrorist and safeguarding his family along with Rishi out of the court.

Malishka rejoices at the plan while Abhay executes the same with one of the terrorists.

Meanwhile, Malishka sees Balwinder and insults him that Lakshmi would never trust him even though Balwinder tells her the truth.

She also says that as long as Lakshmi will have her ‘mangalsootra’ around her neck, she will keep loving Rishi.

Balwinder plots to destroy Lakshmi's mangalsootra and make her love him instead.

Meanwhile, Rishi and Lakshmi find each other but due to the loss of blood from Lakshmi’s injury, she faints while Rishi makes her sit on a bench.

As Lakshmi gains consciousness, Rishi recalls the way, Lakshmi hugged him to share his stress.

In the same way, Rishi also connects their forehead with the closest proximity and later hugs her to transfer her pain.

Lakshmi looks at him lovingly and admires his adorable gestures but eventually begins feeling weak.

Elsewhere, a terrorist holds Malishka’s hand to take her to Munish but on one order of Abhay, he frees her.

This makes Malishka confident that her family and Rishi will safely get out of here.

Rishi sees a terrorist at the door who actually is Balwinder covered with the mask.

© Copyright tellybest.com, 2020, 2021. All Rights Reserved. Unauthorized use and/or duplication of any material from tellybest.com without written permission is strictly prohibited.
Cached Saved on: Saturday 1st of October 2022 09:59:47 PMCached Disp on: Wednesday 5th of October 2022 04:48:03 PM