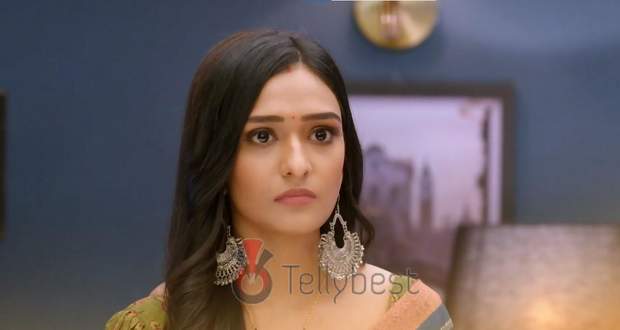 Today's Bhagya Lakshmi 16th August 2022 episode starts with Neelam telling Virendra that his suggestion is wrong as Rishi should focus on the important meeting.

Virendra agrees after which he and Harleen suggest that Rishi and Lakshmi can even go abroad afterward to have fun.

Meanwhile, Malishka hears them and gets angry.

Back at Golu's house, Balwinder is complaining about food while asking for non-veg.

However, Golu tells him that he can't go outside otherwise he will get arrested.

Balwinder angrily talks about the Oberoi family and says that he will get his revenge anyhow.

On the other hand, Aayush tells Rishi that the organization of the party at their hotel is done and only the catering is left which is not his cup of tea.

Rishi gets worried while Malishka comes there and offers to handle the catering.

Aayush says that it's a great idea and makes Malishka think that he is talking about her.

However, Aayush says that Lakshmi will handle it and Rishi agrees while complimenting her.

Malishka leaves the room and feels angry thinking that she would have been the center of attention if Lakshmi wasn't there.

At night, Rishi and Lakshmi childishly argue that they won't miss her when he goes for the meeting and turn away from each other.

They both think to themselves that they can't but miss each other.

The next morning, Rishi bids the family goodbye as he keeps looking at Lakshmi who is standing near the staircase.

He leaves the house and gets annoyed in the car that Lakshmi didn't even talk to him or bid him goodbye.

Meanwhile, at the house, Lakshmi works in the kitchen as she talks about Rishi getting angry that he bid everyone goodbye, even Malishka but not her.

Just then, Aayush comes there telling her that they need to go to the office for the party when Malishka comes there says that she will come too as she wants to help.

On the other hand, Neelam argues with Virendra and tells him that she has sent Malishka with Aayush and Lakshmi to handle everything as she doesn't trust Lakshmi.

Later, at the hotel kitchen, Aayush tells the chefs to follow only Lakshmi's orders and leaves while Malishka thinks that she will soon return as Malishka Rishi Oberoi.

Afterward, Rishi videocalls Lakshmi and asks her if all the preparations are done and she replies in a positive tone.

Further, Lakshmi jokes with him to calm him and he also praises her.

However, Malishka is overhearing them and gets jealous.

© Copyright tellybest.com, 2020, 2021. All Rights Reserved. Unauthorized use and/or duplication of any material from tellybest.com without written permission is strictly prohibited.
Cached Saved on: Sunday 2nd of October 2022 12:38:17 AMCached Disp on: Wednesday 5th of October 2022 06:23:32 PM