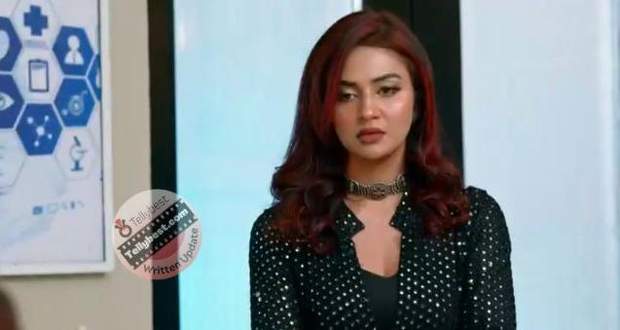 Today's Bhagya Lakshmi 16th December 2022 episode starts with Rishi telling Lakshmi that no one will listen to him as Kiran has taken Lakshmi’s name only.

Rishi further announces Kiran should have said Lakshmi has saved her in an irritating voice but Lakshmi informs Rishi she is innocent.

She even tells Rishi that he does not want to understand this who frustratingly reminds Lakshmi that he is the only one who supports her in the family.

Meanwhile, Rishi gets a call from Malishka who urges Rishi to help her take Kiran home and she even tells Rishi that she knows Rishi does not love her anymore.

This agitates Rishi and he cuts the call with a frown and turning to Lakshmi, he informs her that he needs to help Malishka.

On the other hand, in Virendra’s room, Neelam tells Virendra angrily that she will stay in a guest room as Virendra is siding with Lakshmi.

Virendra however stops Neelam from going by pulling her arm and announces he will stay in the guest room but Neelam denies it.

Neelam even tells Virendra she will not disrespect her husband and Virendra questions her if she respects him this much she should not oppose him.

Neelam walks away after announcing she is doing it for her son angrily.

On the other hand, as soon as Rishi helps Kiran sit on her bed, she asks him if he is angry with her for taking Lakshmi’s name but Rishi firmly informs her that Lakshmi can never do this.

Malishka arrives there at the same time and urges Rishi to stay with her for some time as she is feeling a bit lonely.

Rishi however denies it by telling Malishka that he has a headache but Malishka drags Rishi away to give him some medicine.

Meanwhile, in the car, Shalu expresses to Ayush that she is scared Rishi will divorce Lakshmi in court tomorrow but Ayush tells her that Rishi loves Lakshmi madly so he will not do it.

When Shalu tells Ayush that she did not stay with Lakshmi because of her fear of Neelam, Ayush gives her his phone to call Lakshmi.

Shalu calls Lakshmi and when she picks up, Shalu questions her if she is okay and Lakshmi replies she is alright.

After the call ends, Shalu orders Ayush to promise her that he will support Lakshmi and Ayush promises her this.

In the meantime, in Malishka’s home, Malishka mixes a drug in water and offers it to Rishi who drinks it without protest.

Afterward, Rishi starts feeling sleepy and orders Malishka to call Ayush but with a smirk, Malishka embraces him in a hug.

On the other hand, Sonal is talking to Aashish, she gets a call from Malishka who informs her about her plan’s success.

Sonal then informs Malishka now she will tell Lakshmi about it which scares Malishka as she is sure Lakshmi will spoil it but Sonal orders her to relax.

Later while Lakshmi is looking at her wedding picture with an upset expression, Sonal calls her and pretends it is Rishi and praises him for choosing to spend the night with Malishka.

Sonal even adds that Rishi has betrayed Malishka and when Lakshmi informs her it is her, Sonal cuts the call with a grin.

Afterward, while Lakshmi is walking out of the house in a hurry, Neelam orders her to stop and calls her a bad omen.

© Copyright tellybest.com, 2022, 2023. All Rights Reserved. Unauthorized use and/or duplication of any material from tellybest.com without written permission is strictly prohibited.
Cached Saved on: Wednesday 25th of January 2023 06:37:33 PMCached Disp on: Wednesday 1st of February 2023 05:33:11 PM