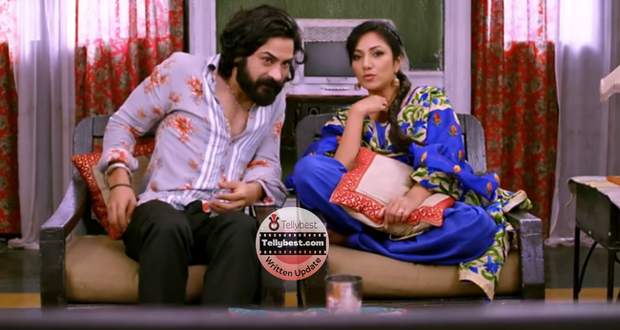 Today's Bhagya Lakshmi 16th January 2023 episode starts with Ayush trying to embrace Lakshmi in a hug while calling her sister-in-law.

Irritated Rano orders Ayush not to call Lakshmi “sister-in-law” but Ayush announces that Lakshmi will always be his sister-in-law even if he dies.

This causes Lakshmi to tear up and Ayush urges Lakshmi to not take a rush decision as Rishi will also not marry anyone.

Lakshmi looks surprised hearing this but Ayush reminds her about her and Rishi’s fate being connected with each other.

Meanwhile, on the streets, Malishka questions Rishi to say if he really loves her and while Rishi remains silent, Malishka mentions that she is asking this only because Rishi has put a ring on her finger.

However, when Malishka reminds Rishi about his plan of not getting any hate from anyone, Rishi mumbles that he will marry her and embraces her in a hug.

On the other hand, in Bajwa's house, Shalu and Bani both try to change Lakshmi’s mind about the marriage when Rano orders Rahu-Ketu (Shalu-Bani) to close their mouth.

Rano even announces that Lakshmi cannot change her mind as Lakshmi’s marriage with Balwinder has spread like wildfire in the colony.

At the same time, the pandit arrives there and gets happy when Rano tells him that Lakshmi is getting married.

The pandit informs Rano that as soon as Lakshmi gets married he will arrange Neha’s marriage with the rich groom.

After the pandit walks away, Neha asks Rano if her dream of becoming rich will come true with dreamy eyes, and Rano replies positively.

Afterward, Rano and Shalu get into an argument about Lakshmi’s marriage again during which Rano offers them to not attend the wedding.

Rano even emotionally blackmails them by reminding them that if Lakshmi does not get married then Neha’s marriage with the rich guy will be canceled.

When Rano asks Lakshmi if she does not remember how she has given them a home after their parent's death so she should repay her back, Lakshmi announces that she will indeed marry with a hard face.

Hearing this, Rano hugs Lakshmi for this, and Lakshmi’s face remains hard.

In the meantime, in a room, Kamli puts a hand on her stomach while telling her unborn baby that she thinks Lakshmi is very pure unlike Balwinder so she thinks she can trust her.

Kamli also mentions that though she does not know Lakshmi but she feels Lakshmi will not betray her.

Later, in Oberoi's mansion, Karishma and Harleen argue with each other about Lakshmi and Rishi marrying different persons.

At the same time, Neelam announces that if Rishi did not agree to the marriage they would not be able to walk with their head held high.

Meanwhile, Virendra tells Karishma that Lakshmi is not a gold digger when Karishma trash talks about Lakshmi.

Even Harleen puts Karishma in her place by reminding her that if she knew how to mind her own business she would live in her in-laws' house not here.

However, Neelam orders everyone to get silent as she wants to arrange Rishi-Malishka's marriage in a grand way.

On the other hand, while Kiran and Sonal are panicking about Malishka, Neelam and Karishma arrive there with lots of gifts and inform Kiran that now they are officially samdhan.

When Karishma narrates how Rishi has put Lakshmi in her place by proposing to Malishka in front of her, Sonal gets extremely happy but Kiran looks sad.

Kiran's sadness vanishes as Neelam urges her to start preparing for Malishka and Rishi's marriage.

Meanwhile, on the streets, Ayush promises to Shalu that he will not let Lakshmi's marriage happen and she also tells him that Balwinder is out on bail so they have no option to do anything.

© Copyright tellybest.com, 2022, 2023. All Rights Reserved. Unauthorized use and/or duplication of any material from tellybest.com without written permission is strictly prohibited.
Cached Saved on: Wednesday 25th of January 2023 11:22:26 AMCached Disp on: Wednesday 1st of February 2023 10:15:11 PM