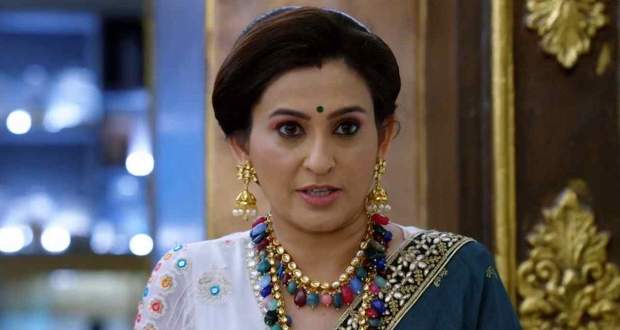 He even says that Lakshmi is perfect for Rishi.

Hearing this, Neelam tries to say something contradictory but Virendra silences her by saying that she is responsible for this.

While Virendra is busy showering Lakshmi with love, Malishka falls at Rishi’s feet and apologizes.

Surprisingly, Neelam angrily orders Malishka and Kiran to leave her house immediately otherwise she will call the police.

However, Malishka quickly realizes that it was a nightmare.

Back in reality, Balwinder tells Rishi that Malishka is guilty and he even searches his phone but is unable to find it.

Without trusting Balwinder, Rishi accuses him of misleading as Malishka has stopped him from escaping.

Hearing this, Malishka smiles in her mind for winning this time.

Elsewhere, in the room, Dadi gets scared as she thinks someone is in her room.

In the living room, Balwinder once again tries to convince everyone by saying that Malishka is paying him nowadays but Malishka asks him to shut up.

At the same time, Lakshmi says that Malishka is capable of this.

Balwinder turns to Lakshmi and says that he loves her.

Even Virendra comes forwards to slap him for defaming his daughter.

While Virendra is busy slapping Balwinder, Dadi comes down the stairs hurriedly.

She also slaps Balwinder for it.

While Dadi is explaining to everyone about the bottle vanishing magically, Balwinder tries to elope.

However, Dadi throws a bottle at him and he falls to the ground senseless.

Dadi’s perfect aim surprises everyone and Dadi proudly declares herself a superwoman.

Rishi then announces that he will tie Balwinder in his room.

Later in Rishi’s room, while Dadi and Ayush are bickering with each other, Malishka arrives there.

Seeing Malishka, Lakshmi questions her intentions and they get into an argument.

During the argument, Rishi tells Malishka that this time he needs proof of Malishka’s innocence.

Hearing this, Malishka asks Rishi why he cannot trust her.

Even Dadi and Ayush urge her to leave.

After Dadi and Ayush walk away, Lakshmi orders Malishka to leave as this is her and Rishi’s bedroom.

© Copyright tellybest.com, 2020, 2021. All Rights Reserved. Unauthorized use and/or duplication of any material from tellybest.com without written permission is strictly prohibited.
Cached Saved on: Friday 30th of September 2022 06:36:00 PMCached Disp on: Saturday 1st of October 2022 04:23:49 PM