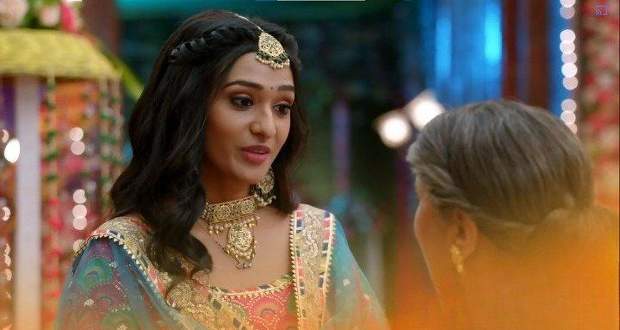 Today's Bhagya Lakshmi 16th June 2022 episode starts with Lakshmi trying to avoid Rishi but Rishi catches up with her and pins her to a decoration Piller forcefully.

He then urges Lakshmi to speak but they get interrupted by Gautam’s family's arrival.

Seeing the opportunity, Lakshmi runs to greet them while Rishi just stares at her longingly.

Later when Lakshmi runs to call Ahana for the engagement, she gets collided with Rishi.

While they are lost in each other eyes, Rishi notices Malishka at the entrance and drops Lakshmi.

He then tells Lakshmi arrogantly that they need to talk but Lakshmi once again says that she has other things to do right now.

When Lakshmi approaches Ahana, Karishma orders Devika to take Ahana to the ceremony and stops Lakshmi.

Karishma then asks Lakshmi what she will say to the judge when she meets the judge as she is pregnant with Rishi’s baby.

However, Ayush calms Karishma down by claiming that Lakshmi is not worthy of their attention.

After they leave, Lakshmi tells herself that she will not let anything break her relationship with the whole family.

While everyone is complimenting Ahana for her looks, Rishi notices Malishka flirting with a new guy.

In the room, Rishi once again asks Lakshmi if she is ready to talk while Lakshmi is searching for kaleeras. Instead of answering, Lakshmi walks away.

However, Rishi follows her to the hallway and grabs her hand.

Lakshmi tries to free herself but Rishi drags her to the room for discussion.

Elsewhere, Kiran interrupts Malishka’s flirting with a guy and orders her to go to Rishi’s room.

She even advises Malishka to pretend in front of Rishi that she is leaving Rishi’s so Rishi can stop her.

While Lakshmi is sewing Rishi’s kurta, Rishi announces that Lakshmi is just trying to harm his family.

Hearing this, Lakshmi gets hurt and walks away leaving Rishi frustrated.

While walking she helps Malishka to regain her balance, Malishka asks her why she got pregnant.

Ahana arrives at the scene and borrows Lakshmi away.

Later, Rishi again tries to talk with Malishka but Malishka accuses him of using her and walks away.

At the same time, Ayush approaches Rishi and advises him to put this drama on hold for a while.

In the end, Ayush enters Ahana's room and advises Ahana to stay away from Lakshmi.