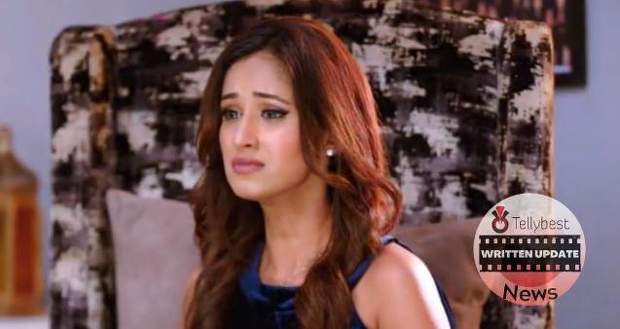 Today's Bhagya Lakshmi 16th November 2022 episode starts with Lakshmi calling Shalu and informing Shalu that she needs to beg forgiveness from their dad in a crying voice.

Hearing Lakshmi’s panicked voice, Shalu orders Lakshmi to take deep breaths while Lakshmi informs her that she has done something very wrong.

Shalu even orders Lakshmi to tell her the truth but before Lakshmi can say anything, she hears Kiran calling her.

Later in the hall, Kiran yells that she knew Lakshmi is a fraud but she never thought Lakshmi will go to this extent while Lakshmi looks confused.

Even Karishma questions Kiran why she is yelling at Lakshmi and Kiran announces that Malishka is kidnapped.

Hearing this, Neelam questions Kiran why she is here instead of searching for Malishka.

Kiran however accuses Lakshmi of kidnapping Malishka and even Soniya tells everyone about Lakshmi telling Rishi about her plan of vanishing Malishka if she tries to come between them.

Lakshmi gets stunned to hear this and informs everyone that she told Rishi as a joke, but Kiran and Soniya refuse to believe it.

Neelam in the meantime orders Lakshmi to reveal where she was in the morning but Lakshmi remains silent.

Virendra also urges Lakshmi to reveal it to prove her innocence and adds that he believes in Lakshmi.

Lakshmi however announces that she had some work to do in a whisper but Kiran continues to interrogate Lakshmi.

Kiran even raises her hand to slap Lakshmi but Harleen holds her hand.

Harleen even reminds Kiran angrily not to forget she is talking to Lakshmi but Kiran announces in desperation that she will not care about the Oberoi family’s reputation if she does not find her daughter.

Even Abhay chimes in that they came here first just because they care about Oberoi’s family’s reputation.

While everyone is busy talking about Malishka’s disappearance, Lakshmi runs away from there.

A flashback shows how Lakshmi got a call from Ayush who informed her about him getting into an accident.

He further urges Lakshmi to come to the accident spot in desperation without informing anyone about it and Lakshmi rushes to the spot.

On the other hand, Ayush crushes himself and starts sobbing while looking at the injured bike driver.

Lakshmi arrives there at the same time and informs Ayush that the bike driver is alive which clams down nervous Ayush.

Later while Lakshmi is driving, Ayush tells her nervously that police can not learn about it as it will harm the Oberoi family’s reputation.

Lakshmi promises Ayush that she will keep her mouth shut while Ayush continues cursing himself for being careless.

Back in present, Lakshmi starts sobbing as she thinks she cannot break Ayush’s promise and tell everyone the truth.

She further yells that she is not responsible for Malishka’s disappearance.

© Copyright tellybest.com, 2022, 2023. All Rights Reserved. Unauthorized use and/or duplication of any material from tellybest.com without written permission is strictly prohibited.
Cached Saved on: Monday 21st of November 2022 01:33:06 AMCached Disp on: Tuesday 29th of November 2022 10:58:05 AM