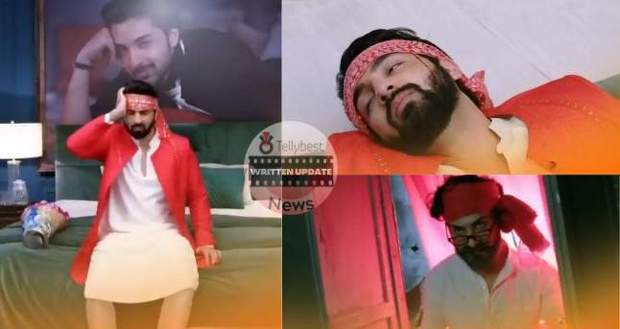 Today's Bhagya Lakshmi 16th October 2022 episode starts with Harleen trying to make Rishi understand that Lakshmi loves him as she gets jealous seeing Rishi with Malishka.

Confused Rishi starts blabbering if Harleen means Lakshmi has become possessive and has developed a liking for him and Harleen nods.

Meanwhile, Ayush saves Virendra from a poll while Virendra looks at the poll with wide eyes.

On the other hand, while Lakshmi is busy expressing her worry to Shalu about Malishka manipulating Rishi, Rishi is eavesdropping on them.

Shalu offers Lakshmi a glass of water and advises her to have faith in Rishi.

Ayush at the same time notices Rishi standing there and questions him about it.

Lakshmi comes out of the room, looks at Rishi sternly, and walks away.

After Lakshmi walks away, Rishi stands up and thinks she likes Lakshmi being possessive of him.

Neelam on the other hand orders Malishka to stay in bed otherwise her ankle will pain even more.

Malishka however is wondering about Balwinder and thinks she needs to take the pen drive from him.

Even Soniya tries to stop Malishka from leaving but Malishka makes up an excuse and leaves.

Meanwhile, Balwinder writes a thread note for Malishka, thinking this will be his first attack on her.

On one hand, Balwinder is creepily watching Lakshmi from a distance and thinking he will be a hero for saving Lakshmi; on the other hand, frustrated Malishka thinks that Abhay was right about Balwinder being an unfaithful dog.

Malishka then finds Balwinder’s note and runs to talk to him.

Elsewhere, looking at Lakshmi coming down the stairs, Balwinder starts thinking how Lakshmi is important to him just like alcohol.

He then spread his arms for Lakshmi near the stairs but Lakshmi does not see him.

Malishka arrives near the balcony just then and tries to grab Balwinder's attention with her eyes but fails.

Malishka even puts her hands on Lakshmi’s eyes and orders Balwinder to leave and Balwinder obeys this time.

Realizing it is Malishka, Lakshmi turns around and gets into a heated argument.

During the argument, Lakshmi firmly questions Malishka about why she closed her eyes and who she is hiding.

Malishka denies it and yells that she is waiting for the moment of Lakshmi and Rishi’s divorce.

As soon as Malishka leaves, Lakshmi tells herself that she will not let anything happen to the Oberoi family till she is here.

Elsewhere, Rishi collides with Malishka but gets frustrated when Malishka does not shout at him.

He mentions this to Malishka but she walks away abruptly.

Malishka then finds Balwinder and requests him to give her the footage.

Malishka further adds that they are on the same ship and if they don't help each other, they both will suffer.

Hearing this, Balwinder realizes his mistake and while handing over the pen drive, he tells Malishka that he has a spare copy of this so Malishka better not backstab him.

© Copyright tellybest.com, 2022, 2023. All Rights Reserved. Unauthorized use and/or duplication of any material from tellybest.com without written permission is strictly prohibited.
Cached Saved on: Monday 21st of November 2022 03:00:59 PMCached Disp on: Thursday 1st of December 2022 01:13:28 AM