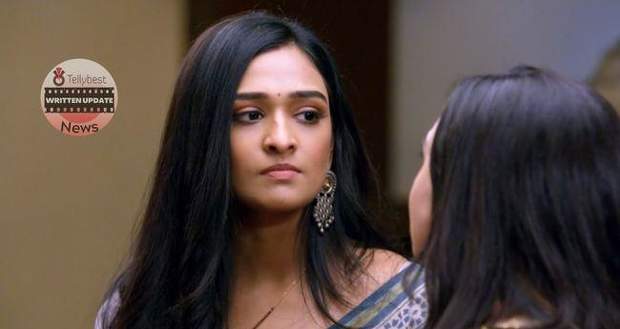 Today's Bhagya Lakshmi 16th September 2022 episode starts with Rishi and Balwinder fighting each other even though Rishi thinks he is a terrorist because of the mask.

Meanwhile, Neelam hears Abhay’s deal with the terrorist and promises to give him three lakh per member for taking them outside the court in safety.

On the other hand, Munish waits for the ACP’s call and it soon comes.

He warns the police to address him with respect and tells his demands to the ACP.

He says that he needs the Police to free three of his leaders while the ACP says that this is impossible because those terrorists will be executed tomorrow.

Munish threatens to kill the Oberois if his demands will not be fulfilled.

Meanwhile, Rishi fights off Balwinder and he runs away.

Rishi takes Lakshmi’s hand and band-aids her again promising her that he and Lakshmi will make everything right.

The officer tells him that he has already been getting calls from the ministers regarding the hostage situation of the Oberois.

Dadi and Devika are having a hard time thinking about their family since they are scared about the Oberois.

Devika tells Dadi that Munish has put in some demands and says that the police won’t be able to do anything until the demands are fulfilled.

Dadi feels sick and her health begins deteriorating out of tension while Devika helps her get back to the car.

Elsewhere, in the courtroom, Lakshmi and Rishi are trying to find Aayush and others when Rishi goes ahead to look for them while Lakshmi sees a girl about to be sexually harassed by a terrorist.

She comes to help and pushes the terrorist while the girls manage to run away.

However, their escape does not last for long as Lakshmi gets captured by a terrorist who takes her to Munish.

Meanwhile, Aayush, Neelam, and others are dealing with the terrorist to get out safely when Malishka says she is going to bring Rishi and Lakshmi.

Even though Aayush insists on going with her but Malsihka refuses.

Aayush tells Shalu that he is getting a gut feeling that something is going to be wrong.