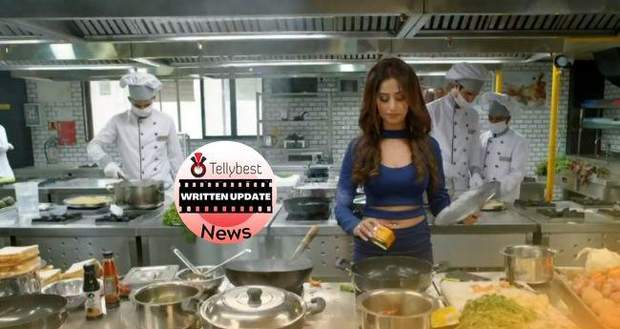 Today's Bhagya Lakshmi 17th August 2022 episode starts with Lakshmi and Rishi telling each other that they will have a party later at home for both of their success.

Later, Malishka praises Lakshmi's cooking while she leaves from there.

Further, Malishka adds power to the curry made by Lakshmi while Aayush comes there and catches her red-handed.

Aayush creates a scene and humiliates Malishka in front of everyone after which Malishka proves her innocence by saying that Lakshmi herself told her to add the powder to the curry once it cools down.

Lakshmi also agrees to Malishka's statement after which Malishka makes Aayush apologize to her.

Afterward, both Rishi and Lakshmi imagine each other at their respective places as a way to get courage.

They both say thank you to their imaginative partners and smile thinking about each other.

In Hyderabad, Rishi's meeting gets done and he calls Lakshmi who tells him about their imaginative partners.

They both accept that they missed each other while Rishi asks her what is the relationship between them.

On the other hand, Malishka overhears them and burns in jealousy as she thinks that Lakshmi is stealing Rishi from her.

Rishi and Lakshmi tease each other and decide to talk about their relationship later.

Lastly, Rishi and Lakshmi wish each other luck and disconnect the call while Malishka forms a plan to humiliate Lakshmi and get her revenge.

Further, Malishka calls Balwinder and convinces him to agree to her plan in exchange for more money.

As the call disconnects, Malishka gets startled seeing Aayush standing behind her.

He asks her if she was calling someone to create trouble for Lakshmi while Malishka refuses of doing such a thing.

Further, they both get into an intense argument as he demands her to leave so that he can focus on catering to the food critics.

However, Malishka says that she was sent by Neelam and that she will leave only when Neelam calls her and tells her to leave.

Malishka goes to the kitchen while Aayush thinks that he will catch Malishka red-handed.

© Copyright tellybest.com, 2020, 2021. All Rights Reserved. Unauthorized use and/or duplication of any material from tellybest.com without written permission is strictly prohibited.
Cached Saved on: Friday 30th of September 2022 05:37:19 PMCached Disp on: Saturday 1st of October 2022 04:38:20 PM