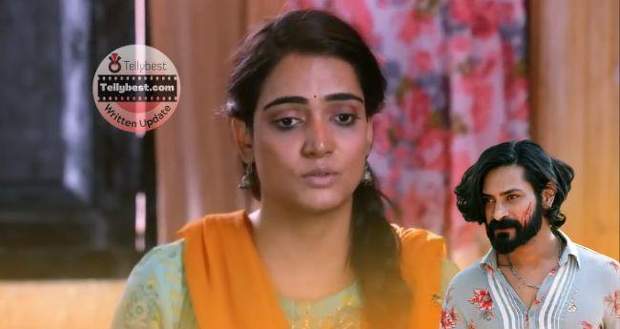 Sonal tells Kiran to thank her for Rishi-Malishka’s marriage as she is the one who made it happen.

While Kiran is smiling, Malishka enters the house with happiness and excitedly announces her love has won against Lakshmi today.

Rishi also apologizes to Kiran for his mistake and Kiran forgives him very easily.

On the other hand, Virendra orders Ayush to bring Balwinder to the office as soon as possible.

Meanwhile, in Bajwa's house, Lakshmi tries to talk to Bani in the kitchen but she does not respond.

Back in Virendra’s office, Balwinder enters looking like a scared mouse and calls Virendra sir.

Balwinder then asks Virendra the reason for it and Virendra asks him if he really does not know why he is here in an authoritative voice.

Virendra then orders Balwinder to forget about marrying Lakshmi in low voice but Balwinder refuses by saying that his marriage will happen with Lakshmi only.

Balwinder further states that he has gone through a lot to marry Lakshmi so now he will not change his mind.

Angry Ayush yells at Balwinder when he mentions that he loves Lakshmi and Ayush also hits the table hard.

He even goes to fight Balwinder but Virendra orders him to stop.

Later, in Oberoi's mansion, Neelam and Karishma are overjoyed as Rishi is finally marrying Malishka and Karishma walks away.

Afterward, entering the room, Rano thanks Neelam for giving her money and she also tells Neelam that she has done her work.

A flashback shows Neelam calling Rano to meet her if she wants 10 lakh rupees and Rano excitedly agrees.

When Rano arrives at the location, she does not find Neelam and gets stressed but just then she gets a call from Neelam who orders Rano to arrange Lakshmi’s marriage.

Rano asks Neelam how she will do it since Lakshmi loves Rishi but Neelam provokes Rano by offering a lot of money for this.

She even tells Rano that the driver will give her advanced payment and the rest she will receive after the job is done.

Back in present, Rano praises herself for making Lakshmi agree to the marriage but Neelam orders her to keep her mouth.

Neelam then gives her a lot of cash and Rano reminds her that this is only for Lakshmi’s agreement.

Hearing this, Neelam informs Rano that she will get the rest of the money once Lakshmi is married.

Meanwhile, Balwinder expects the money while mentioning that now he is a crorepati and Lakshmi has brought him wealth.

Balwinder also adds that he will buy a mansion for Lakshmi.

Back in the Oberoi mansion, Ranop notices Rishi walking into the hall but she gets relieved when he walks away without noticing the money.

Late that night, Lakshmi tells herself that she has to do this to give justice to Kamli.

On the other hand, Rishi gets a video call from Malishka who urges him to promise her that he will not recall Lakshmi.

At the same time, Soniya arrives there and starts chit-chatting with Malishka while Rishi looks gloomy. Afterward, entering the room, Ahana tells Soniya that if Rishi looks inside his heart he will find he loves Lakshmi.

Soniya, Ahana, and Devika continue to argue while Rishi doubts himself if he really loves Lakshmi.

© Copyright tellybest.com, 2022, 2023. All Rights Reserved. Unauthorized use and/or duplication of any material from tellybest.com without written permission is strictly prohibited.
Cached Saved on: Wednesday 25th of January 2023 11:30:27 AMCached Disp on: Wednesday 1st of February 2023 09:23:59 PM