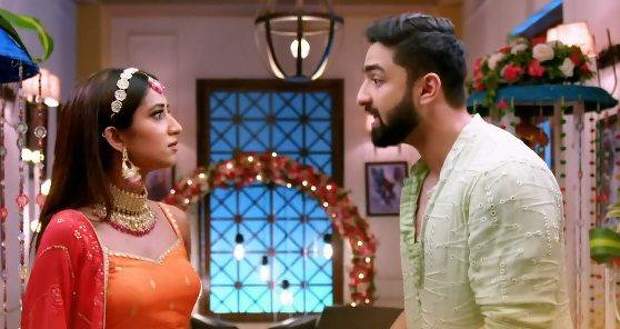 Ayush as usual blames Lakshmi for ruining his family’s peace while Lakshmi stares at him.

During their conversation, Neelam along with Soniya arrives there and gives Ahana her blessing for the upcoming married life.

After Neelam, Soniya, Ahana, and Ayush leave the room, Lakshmi promises herself that she will take care of Neelam’s swollen foot throughout the engagement party.

In the living room, while everyone is busy asking Neelam about her well-being, Ahana takes Gautam aside for discussion.

On the other hand, Rishi notices Malishka flirting with a random dude and gets jealous.

At first, Rishi tries to stop Malishka but Malishka ignores him and walks away.

Rishi then goes to talk to Kiran but Kiran also replies that Rishi is responsible for Malishka’s behavior.

Later, Gautama announces that he and Ahana are going to dance to a Punjabi song so their engagement party does not become boring.

During the dance, Malishka also joins them with a random guy but jealous Rishi comes between them.

Everyone else also joins them but whenever Lakshmi and Rishi collide they behave awkwardly.

After the dance, Neelam asks the pandit to begin the ceremony and the Pandit Ji agrees.

Karishma then asks Neelam to begin the shagun and after Virendra’s persuasion, she agrees.

However, after the Roka ceremony, Gautam kneels at his feet and proposes to Ahana for marriage once again.

Afterward, Gautam’s parents reveal that they have another ritual in which the soon-to-be daughter-in-law will visit their home and decide if anything is needed there and the mother-in-law will buy that for her.

Ahana agrees to go and Rishi takes Malishka aside for discussion.

However, Malishka starts blaming Rishi for betraying her like this.

Hearing this, Rishi gets frustrated and announces that he has not romantically touched Lakshmi.

At first, Malishka does not believe him but when Rishi swears, she is relieved.

She then furiously enters the party despite Rishi’s warning and tells Neelam about Lakshmi’s pregnancy.

Neelam along with Malishka tells everyone that Lakshmi is not pregnant with Rishi’s child.

When everyone starts asking whose baby Lakshmi is carrying, Lakshmi stays silent.

© Copyright tellybest.com, 2022, 2023. All Rights Reserved. Unauthorized use and/or duplication of any material from tellybest.com without written permission is strictly prohibited.
Cached Saved on: Monday 21st of November 2022 06:31:38 PMCached Disp on: Thursday 8th of December 2022 02:08:21 AM