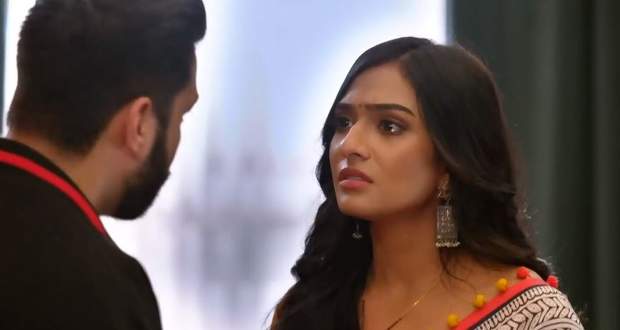 Today's Bhagya Lakshmi 17th May 2022 episode starts with Rishi taking Lakshmi to a corner to personally inform her that he is marrying Malishka.

Further, while proving he is doing the right thing, Rishi mentions that because Lakshmi humiliated Malishka he had to promise to marry Malishka.

Rishi cordially invites Lakshmi for his engagement with Malishka.

Seeing Rishi walk away, Lakshmi holds get hand and requests not to do such things.

However, Rishi says that the day he signs the final divorce papers, he will immediately marry Malishka.

Rishi also suggests Lakshmi join her job at the jewelry shop again as he'll buy Malishka's wedding jewelry from there which will get a great commission for her.

While Lakshmi cries badly in her room, Malishka reaches there and insults Lakshmi.

Malishka keeps taunting Lakshmi and makes fun of her tears of pain.

Having heard enough of Malishka's nonsense, Lakshmi gives a befitting reply to her.

Lakshmi tells Malishka that Rishi is marrying Malishka just because he has to save her dignity.

Further, Lakshmi says that Rishi has taken this decision to hurt Lakshmi not because he loves Malishka.

Malishka says that no one likes Lakshmi not even Rishi however it's not sure whether Malishka is explaining Lakshmi or herself.

Later, Malishka calls Shalu and informs her that she is getting engaged to Rishi.

In the meantime, everyone is preparing for the grand engagement.

However, Rishi's face lacks the happiness which is abundantly seen on Malishka's face.