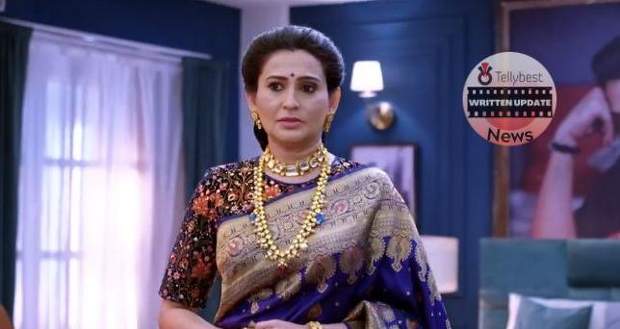 Today's Bhagya Lakshmi 17th November 2022 episode starts with Kiran yelling that she does not trust Lakshmi.

Hearing this, Virendra announces that he knows Lakshmi cannot do anything and Harleen also adds that Lakshmi is her daughter-in-law.

Virendra gets a call then from the office about the client's arrival and announces he will not go office today but Abhay urges him to go as he can handle the situation.

Meanwhile, Harleen announces that she hopes Malishka is alright and also adds that she will not let anyone do anything wrong with Lakshmi.

Karishma however questions Harleen if Lakshmi is innocent then why she is not revealing where she was in the morning and Kiran nods in agreement.

Abhay who was just observing the scene announces that he needs to call the police and Neelam also adds that Lakshmi is once again throwing dirt on the Oberoi family’s reputation.

Kiran informs Harleen that even if they don’t take Lakshmi’s name the police will questions Lakshmi regardless.

This angers Harleen and she yells that if Lakshmi proves innocent then she will hold everyone accountable for ruining the Oberoi family’s reputation.

Hearing this, Neelam rolls her eyes and Shalu enters the Oberoi mansion.

Later, Shalu gets shocked when Lakshmi mentions that Kiran thinks she has kidnapped Malishka.

Lakshmi further adds that Kiran has a reason to believe it as Lakshmi was not at the home since last night and she just came back in the morning.

Hearing this, Shalu suggests Lakshmi tell everyone where she was last night but Lakshmi denies it as she has promised someone.

Shalu then urges Lakshmi to tell her the truth as she is Lakshmi’s sister and Lakshmi reveals how Ayush got into an accident and how she has to take the injured person and Ayush to the hospital.

This shocks Shalu and she questions Lakshmi if Ayush is all right now to which Lakshmi replies that Ayush is in the hospital as he has fallen unconscious due to shock.

Lakshmi then calls the doctor who informs her that Ayush’s condition is stable now.

After cutting the call, Lakshmi reveals that Ayush was driving while he was drunk and that’s why he thinks he will ruin the family's reputation.

Hearing all this, Shalu suggests Lakshmi call Rishi but Lakshmi denies it.

Shalu scolds Lakshmi for not thinking about herself but Lakshmi yells that she is nothing without the family.

Later, in the hall, the police orders Lakshmi to reveal where she was last night but Lakshmi yells that she never visited Malishka's home.

Abhay however orders the police to arrest Lakshmi and Shalu yells everyone will regret their decision once they learn the truth.

Neelam however throws Lakshmi out of the house in anger.

Afterward, Lakshmi pleads with the police not to arrest her as she has done nothing wrong but the police drag her away handcuffed.

On the other hand, Malishka is tied to the chair with a black cloth covering her face and someone is filming her.

Malishka pleads with Lakshmi to let her go as she will not disturb Rishi from now on even though she loves him in a crying voice.

While Kiran and Neelam mutter that Lakshmi only knows how to lie, Lakshmi tries to deny it.

© Copyright tellybest.com, 2022, 2023. All Rights Reserved. Unauthorized use and/or duplication of any material from tellybest.com without written permission is strictly prohibited.
Cached Saved on: Monday 21st of November 2022 01:47:06 AMCached Disp on: Friday 9th of December 2022 04:31:24 AM