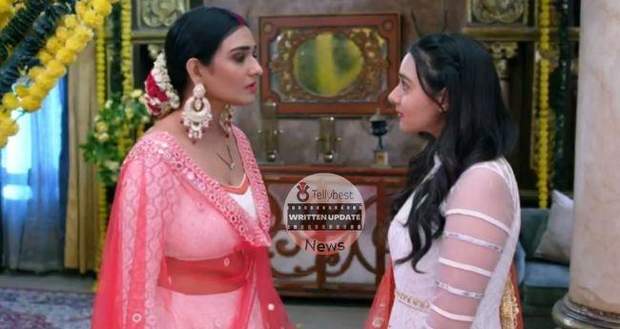 Malishka arrives and excitedly waves the pen drive in front of Kiran’s eyes.

The pen drive falls from Malsihka’s hand but before she can pick it up, Neelam approaches them.

On the other hand, Balwinder tells his friend with an evil smirk that he has the original pen drive so Malishka will get shocked when she opens the pen drive.

Meanwhile, Neelam scolds Kiran for supporting Malishka while Malishka looks at Neelam with a shocked expression.

Neelam however reveals that Malishka has sprained ankle so she should rest and Kiran rests.

After Neelam walks away, Malishka advises Kiran to stay low for some time.

She further adds that Balwinder is very angry right now so it's better to leave him alone.

Rishi on the other hand collides with Lakshmi and Lakshmi tries to walk past him but Rishi does not move.

Angry Lakshmi then reminds Rishi of spying on her but Rishi replies sheepishly that he just wanted to see Lakshmi while Balwinder watches them with fierce eyes.

Lakshmi turns around and gets stunned to see some random girls blowing kisses at Rishi and abruptly walks away leaving Rishi confused.

While walking, Lakshmi feels confused about her getting jealous of every girl for liking Rishi and Rishi stops her behind.

Rishi then questions Lakshmi if she feels jealous of other girls and Lakshmi mutters under her breath that she does not care about Rishi’s activity.

Shalu on the other hand tells Ayush that she fears that maybe Lakshmi’s happiness will not last but Ayush takes Shalu’s hand in his and announces he will not let anything bad happen to Lakshmi.

Meanwhile, Balwinder sprays the sleeping drug on the flowers and gives it to a strange girl, he urges her to give this to Rishi.

Later, while Rishi is telling Lakshmi in his room that he is handsome, girls stare at him, and that girl approaches him and gives him the flower.

Lakshmi starts at the flowers sternly and walks away.

Rishi then smells the flower and falls unconscious onto the bed.

Elsewhere, worried Malishka takes the pen drive from Kiran’s beg and runs away to check the footage.

Kiran starts praying to God for giving Malishka her love as soon as she walks away.

Balwinder on the other hand laughs at Rishi’s motionless body like an evil and yells that today he will do Ravan Dahan.

While Harleen and Virendra are taking selfies, Lakshmi arrives there and tells Harleen that she will bring the goggles for Harleen.

Harleen agrees and after Lakshmi walks away, she smilingly informs Virendra that these small moments matter a lot in life.

Later while Balwinder is picking Rishi up on his shoulder to carry him, he hears the footsteps and quickly hides Rishi behind the sofa.

Balwinder puts the blanket on his head and pretends to be sleepy.

Looking at the sleeping figure, Lakshmi thinks Rishi must be tired and Balwinder wishes Lakshmi to be his wife so she will take care of him the same way.

After Lakshmi leaves, Balwinder drags Rishi out but gets scared when he notices Malishka entering the mansion.

© Copyright tellybest.com, 2022, 2023. All Rights Reserved. Unauthorized use and/or duplication of any material from tellybest.com without written permission is strictly prohibited.
Cached Saved on: Monday 21st of November 2022 08:35:38 AMCached Disp on: Thursday 1st of December 2022 12:35:56 PM