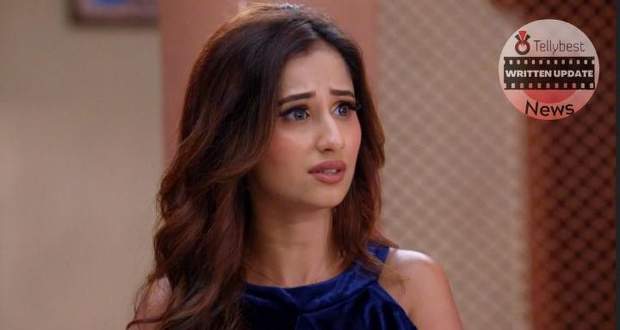 Today's Bhagya Lakshmi 17th September 2022 episode starts with Rishi searching for Aayush and noticing that Lakshmi is not following him.

Meanwhile, Virendra tells Aaysuh that he thinks the terrorists are taking him to Munish.

As expected by Aayush the terrorists make them hostage and take them to Munish where Karishma, Kiran, and Sonia were trapped already.

Munish laughs sarcastically on hearing that Abhay tried to bribe the terrorist and informs the Oberois that loyalty is the root of their group.

He orders the terrorist to find Lakshmi and Rishi since it won’t be fun killing without those two.

Meanwhile, Rishi is anxiously searching for Lakshmi when he hears the announcement to go to Munish since Lakshmi is his hostage now.

Rishi doubts if it is a trap but thinks even if it is, he has to go to confirm it and save Lakshmi if possible.

Meanwhile, ACP calls Munish and tells him that the government has started considering his demands while Munish arrogantly says that since the police are late, the world will see his terror now.

On the other hand, Rishi finds Malishka and tells her that he is going to save Lakshmi while Malishka denies him.

Rishi says that he can do anything for Lakshmi and thus leaves while Malishka takes a gavel and hits his head from behind making him unconscious.

Malishka waits for Munish to complete his countdown but before that Rishi wakes up.

He asks Malishka if she saw who hit him but Malishka denies seeing anyone.

Rishi hears the announcement and is about to run to Munish but Malishka tries to stop him yet again, making Rishi push her hard so her head slams into a pillar.

Malishka pretends to fall unconscious but Rishi apologizes to her and leaves her making Malishka cry in anxiety and defeat.

Suddenly, she collides with Balwinder who grabs her hand to take her somewhere safe but she slaps him hard.

This makes Balwinder tell her in his annoyance that Rishi is going to die today as he leaves from there.

Munish tells Lakshmi who was brought to him by a terrorist that Rishi does not love her and that’s why he did not come.

However, Lakshmi says that she does not want Rishi to come to save her but she knows about Rishi and believes in his love for her.

Munish annoyingly says that this is her end and points a gun to shoot her when suddenly Rishi comes and stands in front of her.

Munish smiles evilly and says that now he believes that Rishi and Lakshmi love each other.

However, he takes off his anger on Rishi and says to him that he knows Rishi’s heart is burning in the fire to fight off Munish.

He asks one of his terrorist companions to cool off Rishi’s heart making Rishi confused.

© Copyright tellybest.com, 2020, 2021. All Rights Reserved. Unauthorized use and/or duplication of any material from tellybest.com without written permission is strictly prohibited.
Cached Saved on: Saturday 1st of October 2022 10:59:38 PMCached Disp on: Wednesday 5th of October 2022 05:06:56 PM