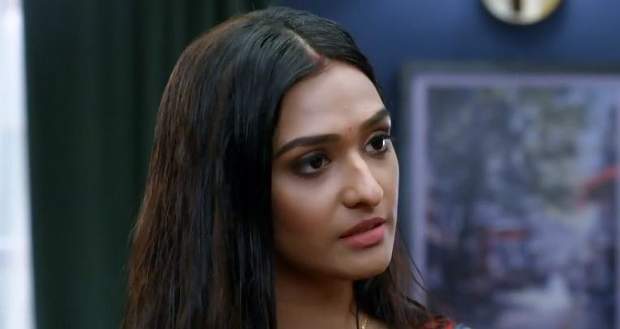 Today's Bhagya Lakshmi 18th April 2022 episode starts with Lakshmi advising Sonia not to try to harm her and Rishi's relationship.

Further, Lakshmi tells Malishka and Sonia that they should not do anything that will get them in trouble.

After they leave, Lakshmi climbs the stool to get something from the cabinet.

Lakshmi slips but at the same time, Rishi comes there and saves her.

When Lakshmi keeps smiling seeing Rishi's care though he doesn't accept his feelings, Rishi asks her to stop her annoying smile.

Later, Malishka is furious with Lakshmi's changed attitude and decides to make her fall to the ground.

However, the Karma does its work and she falls to the floor after bumping into Rishi.

When Rishi puts out his hand to pick her up, Lakshmi holds Malishka's hand and pulls her up.

Hearing this, Lakshmi tells Malishka not to fall again to avoid being touched.

Further, Lakshmi says that she has prepared sweets and serves them to everyone saying that these describe her upbringing.

Virendra asks her where did her manners go while she signed the divorce papers.

When Lakshmi mentions that Malishka had kept a condition for her sign, Virendra says that no condition could be higher than a father-daughter relation.

With tears in his eyes and pain in his heart, Virendra tries to express how disheartened he is by Lakshmi's deeds.

Malishka manipulates everyone with her words to convince them that Lakshmi wanted the divorce.