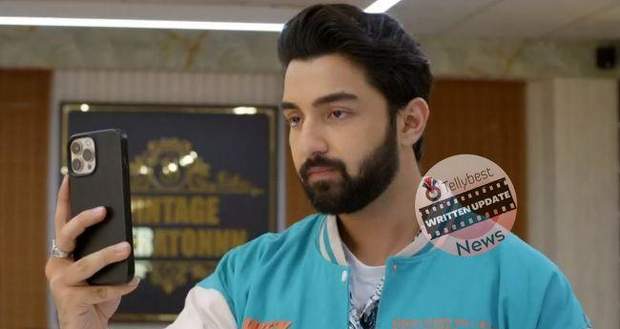 Today's Bhagya Lakshmi 18th August 2022 episode starts with Lakshmi asking the chefs to show her how to do the presentation while Malishka glares at her from behind.

At the same time, excited Ayush enters the kitchen and urges Lakshmi to hurry up.

While Lakshmi is busy talking to the chefs, Malishka smirks to herself as she is sure Lakshmi will fail.

Meanwhile, at the dinner table, the investors ask Ayush to bring the food to the table so they can give a review.

Hearing this, Ayush excitedly introduces Lakshmi to the group and she starts serving the food to the guests.

On the other hand, dressed up as an elite businessman, Balwinder enters the kitchen to inspect the kitchen.

He then orders Mukesh to stay away while he inspects the kitchen.

This makes Mukesh suspicious and he watches the businessman closely, so when Balwinder mixes a powder into the dishes, Mukesh catches him red-handed.

However, before Mukesh can alert everyone, Balwinder hits his head with a pan and dresses up as the chef.

Afterward, Malishka enters the kitchen to check on Balwinder but gets shocked seeing Balwinder in a chef dress.

Balwinder then narrates how he has to attack the chef.

Hearing this, Malishka hits the chef's head once more so he doesn’t regain consciousness.

Elsewhere at the table, after praising Lakshmi for the food, the businesswoman tries to kiss her hands but gets sick all of a sudden.

Before anyone can understand anything, all the people in the restaurant start feeling sick one by one.

Seeing the chaotic situation, Lakshmi and Ayush are shocked while Malishka pats herself mentally for the brilliant idea.

She even asks Lakshmi what she has mixed in the food but Lakshmi looks at her with confusion.

Meanwhile, during the meeting, Rishi feels worried for Lakshmi.

He doesn’t feel happy even after winning the deal.

At the same time in the restaurant, Lakshmi feels heartbroken seeing all the people getting sick after tasting her food.

On the other hand, with disdain in her eyes, Malishka promises to make Lakshmi cry for the rest of her life.

Lakshmi somehow controls herself and orders Ayush to stop serving the food.

Hearing this, Ayush goes to tell the chefs but the chefs inform him that they have also eaten the food but they are not sick.

On the other hand, Malishka blackmails Mukesh and urges him to run otherwise everyone will think he is the culprit.

Mukesh tries to inform her that someone else has mixed something in the food not him but Malishka is persistent.

She even threatens him with Police and Mukesh agrees to leave.