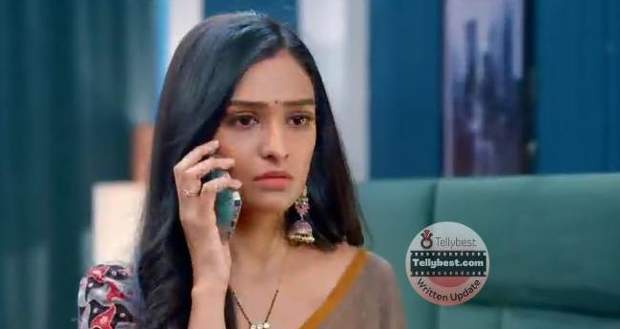 Curling up in the fetal position, Lakshmi recalls how Rishi promised her he would stay with her like a perfect husband and gets even more upset.

Meanwhile, in Malishka's house, Sonal and Malishka clink their drink together to celebrate their victory and Malishka questions her about what she will tell Rishi in the morning.

Sonal advises Malishka to use her fake tears to which Malishka informs Sonal that today Lakshmi will cry just like her.

The next morning, in the Oberoi mansion, Harleen prays to lord Ram that he will do some miracle to save Rishi and Lakshmi’s marriage.

Meanwhile, in Malishka’s home, Malishka wakes Rishi up by kissing him on the lips who gets shocked to see Malishka instead of Lakshmi.

As soon as Rishi stands up, he questions Malishka about what he is doing in her room and Malishka narrates how he was feeling a heavy headache after dropping Kiran in her room so he slept in her room.

Rishi gets worried after hearing it and decides he will go home now but before he can walk away, Malishka urges her to give her a goodbye kiss.

When Rishi looks at Malishka with confusion, she starts telling him how he was not letting her go while murmuring he misses her even after marriage.

Malishka then orders Rishi to see himself in the mirror and Rishi gets shocked to see love bites all over his body.

On the other hand, Neelam finds a servant who is waiting for Lakahmi’s arrival in the kitchen but Neelam orders him to make as per her order.

Thinking Lakshmi must have understood that she is no longer Rishi’s wife, Neelam gives a smug smile and gets happy about it.

In the meantime, in Malishka’s home, Rishi questions Malishka about what really happened between them and Malishka asks him if she should feel happy or guilty about it.

Rishi continuously denies it as he will never cross his limits whereas Malishka informs him that it can happen anytime with anyone who are in love with each other.

Malishka even accuses Rishi of making her lose control with a shy smile and she adds that it was her first night.

Rishi again tries to argue that he can never do this because he is married and putting her hands on Rishi’s cheek, Malishka announces Rishi is shocked.

While Rishi sits on the bed, Malishka tells him in a low whisper that she surrendered herself once Rishi called her his last night.

Malishka even wipes Rishi’s face with her handkerchief since they are memories for her but Rishi hits his hand on the bed only to realize this is the truth.

When Rishi starts losing his temper, Malishka very cunningly announces respect for a girl is very important but she has lost it for Rishi only.

Meanwhile, in Bajwa's house, Shalu and Bani both pray to god not to let Rishi and Lakshmi divorce.

Back in Malishka’s room, Malishka grabs Rishi’s collar while ordering him to speak if he really loves her but Rishi announces he does not know what to think anymore.

When Rishi tries to walk away, Malishka hugs him from behind and yells that she knows Rishi only loves her even if he does not say it.

She further orders Rishi not to betray her and Rishi walks away.

Later on his way, Rishi is about to hit a car as he is still thinking about Malishka’s words but stops just in time.

Later, on one hand, Virendra feels confident thinking Rishi will not divorce Lakshmi; on the other hand, Ayush questions Rishi if he has come back after praying in a temple seeing the red tilak on his forehead.

Rishi however stays silent as he recalls how a pandit has blessed him today on the road.

© Copyright tellybest.com, 2022, 2023. All Rights Reserved. Unauthorized use and/or duplication of any material from tellybest.com without written permission is strictly prohibited.
Cached Saved on: Wednesday 25th of January 2023 01:06:52 PMCached Disp on: Sunday 5th of February 2023 03:15:44 AM